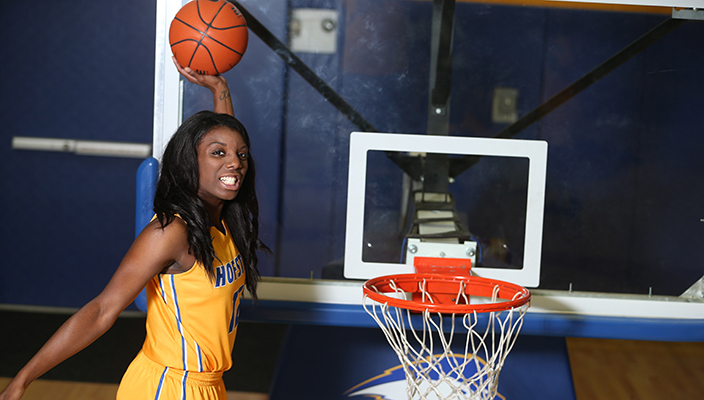 The season’s largest crowd packed the Mack Sports Complex two hours before tipoff. Throngs of screaming fans, most of them schoolchildren, listened with rapt attention as the Hofstra Women’s Basketball team walked to center court to address them. Head Coach Krista Kilburn-Steveskey first took the microphone before looking around to hand it off to a player.

The first volunteer to serve as MC was no surprise. Darius Faulk might have been the logical choice to speak to the arena simply for her role as the team’s point guard and lone senior in the starting lineup. Her status as a hometown hero being a Hempstead native also would make her qualified. But it’s her outgoing personality – what fellow guard Krystal Luciano affectionately calls the team clown – that made her time on the mic fitting.

Within two sentences a joke and a smile had the What I Want To Be Day crowd of more than 1,800 laughing. The address would help galvanize the group, whose thunderous applause would help Hofstra post a 75-50 victory over Northeastern. It also embodied Faulk’s value: providing both levity and production in equal measures as she racked up eight points, eight assists, five rebounds, two steals and two blocks.

“She’s the person who makes everyone laugh,” Luciano said. “We can be having the worst day and she’ll pull a joke out and put everyone at ease. She gives the team a spark and brings everybody together. She likes everybody to be on the same page and happy.”

Faulk has helped bring jovial feelings for both her comedic ability and her stellar point guard production. Hofstra is off to the best 18-game start in program history with the Pride 15-3 and in first place in the Colonial Athletic Association standings with a 6-1 league record.

“The chemistry has been great both on-and-off the court,” Faulk said. “We know where everybody is on the court. We worked hard in the summer every day and now everything is clicking.”

Her 4.8 assists are third in the CAA and her 87 total assists have her in position to best her previous career high of 158 set last season. Her contributions have extended to the hardwood’s other side as her 1.9 steals average and 34 total turnovers generated has made her a candidate for the league’s Defensive Player of the Year.

“The only thing on her mind is to try and find a way to win, and that’s a great character trait,” Kilburn-Steveskey said. “She has that winner’s mentality.”

Faulk has settled into a leadership role despite playing in just her second season at Hofstra. She played her first two seasons at West Virginia, playing in 42 games exclusively as a reserve. Kilburn-Steveskey recruited Faulk out of high school and remembered the types of qualities she first saw in her as a prep player.

Proximity to her family – Faulk is from the same hometown as Hofstra’s campus – made the Pride a logical landing spot when she was looking for a new school and a new challenge. Hofstra also benefited from some surreptitious moves, such as withholding a couple of scholarship offers that freed up a roster spot as the same time Faulk became available.

The Pride then worked hard to push the positive qualities of a program looking to make the first NCAA Tournament in program history. The positive approach from the hometown team worked to convince Faulk, her father, Daren, and the rest of her family that Hofstra was the right choice.

“Everything aligned right and it was a no-brainer to get her here,” Kilburn-Steveskey said.

A dual point-guard system has made Hofstra difficult to defend. Both Faulk and Luciano are in the league’s top-five in average assists and the Pride is third in assist-to-turnover ratio. The setup requires sacrificing statistics due to the finite possessions, but both upperclassmen said they are more content with team success than filling up a stat sheet.

“We both enjoy getting assists and we can each set up teammates,” Faulk said. “It’s fun to watch her (Luciano) pass the ball. We have trust in each other and having two point guards on the floor at the same time is a big part of our success.”

The selflessness is noticeable to teammates. Both Faulk and Luciano have helped create space and shooting opportunities. Junior guard Kelly Loftus has been a major beneficiary and has become Hofstra’s leading scorer by averaging 14.1 points. Luciano and Faulk have shown the ability to drive and run a fast-break and half-court offense, which has helped draw defensive attention away from Loftus.

It also helps when a team leader can get the coaching staff to crack a smile. Faulk’s quick wit has helped the Pride stay focused and loose through the five-month season grind.

“She brings a lot of energy and lightens the mood a lot,” Loftus said. “Her intensity on defense gets us going.”

Joining a new school can be an intimidating experience. But junior forward Anjie White knew the difficulties of transitioning to a new program after starting her career out of state as well. White had transferred from George Washington before Faulk made the move to Long Island. The similarities in the process made the post player a natural fit to reach out to the guard looking to craft a homecoming story.

“Anjie took me in,” Faulk said. “She knew what it was like to come to a new situation as a transfer student, so she gave me background information and told me what to do to help get adjusted.”

Despite growing up in the same hometown as Hofstra, Faulk said she never ventured to the school’s grounds. She said the campus’ size, complete with the athletic facilities and academic building dissecting Hempstead Turnpike, made her feel confident in her decision to leave Morgantown for a familiar area.

The ability to adapt to new surroundings had guided Faulk throughout her prep career. Before graduating Nazareth in Brooklyn as the ESPN HoopGurlz No. 60 overall ranked prospect in 2012, Faulk won a state federation title in 2009 as a freshman at St. Michael’s. To play with better competition and increase her exposure, Faulk then transferred to Nazareth, where she awoke at 5:30 a.m. daily to carpool from Hempstead to the East Flatbush-based school. The long commute didn’t hinder her production, as she averaged 12 points, seven rebounds and seven assists as a senior to earn a nomination to the McDonald’s All-American Girls Game.

Switching high schools helped land Faulk a Division I scholarship with a spot on the Big 12-member Mountaineers. A willingness to embrace new challenges then allowed Faulk to become a starter for a team looking to secure the program’s first-ever NCAA Tournament berth. It also gave her family and childhood friends a chance to see her play. Hofstra has thrived off the presence of the home crowd, starting 8-0 at the Mack Sports Complex this season.

“It’s a blessing to come home and play for a championship contender,” Faulk said. “It’s exciting when you have a chance to make history. Everything fell into place really well and I have no regrets.”

Faulk is set to graduate in May with a degree in sociology. But before parlaying her education into a career, Faulk said she is looking to the Mediterranean to continue her basketball journey. Once Hofstra’s 2015-16 season comes to a close, Faulk will be looking at different leagues in Europe who could use a defensive-minded point guard. Italy is a preference, as Faulk said she would like to follow the path set by former West Virginia teammate Crystal Leary, who is playing in Finland.

“It’ll be a big adjustment but it’s a chance to experience something new and still make a little money,” Faulk said.

Faulk and Hofstra will look stay atop the standings as the Pride takes on Drexel on Friday at 7 p.m. in Philadelphia.