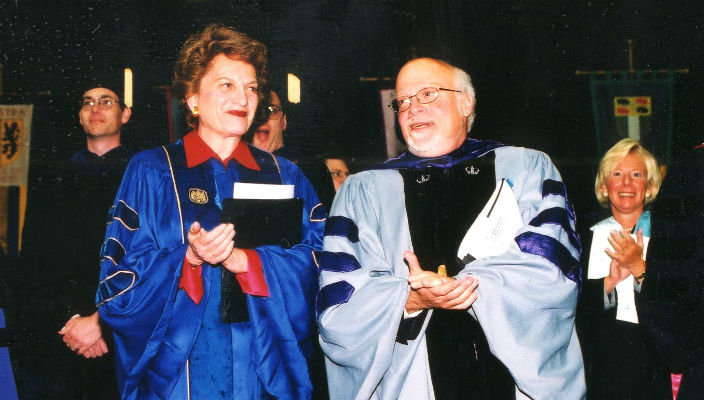 Hofstra Law and the entire Hofstra University community are saddened by today’s news that Judith S. Kaye, the first woman named to New York’s highest court and the first to serve as the state’s chief judge, has died.

Judge Kaye was a good friend to Hofstra and a frequent guest on campus. In 1999, she delivered Hofstra Law’s Annual Lichtenstein Lecture in Legal Ethics, “Safeguarding a Crown Jewel: Judicial Independence and Lawyer Criticism of Courts.” She returned to campus in 2001 to receive an honorary degree and speak at Hofstra Law’s spring commencement.

In 2013 and 2014, she worked with Professor Andrew Schepard, other members of the Hofstra Law faculty and Hofstra Law students to organize the Leadership Summit on School-Justice Partnerships: Keeping Kids in School and Out of Court. The summit brought together more than 250 school teachers and administrators, attorneys, government officials, members of the judiciary, and local leaders to discuss promising and emerging practices and policies in education and the justice system.

“Judge Judith Kaye was a pioneer — a tireless, innovative and eloquent jurist who embodied the highest ideals of public service. She transformed the courts and, in doing that, the lives of all New Yorkers. It was an honor and privilege to know and work with her for many years and to call her a friend.” — Hofstra University President Stuart Rabinowitz

“Judge Kaye had a profound understanding of the strong relationship between individual dignity and justice. She spent her career trying to infuse this idea in to the justice system. She will be truly missed.” — Hofstra Law Dean Eric Lane

“Chief Judge Judith S. Kaye was a remarkable force for good and an inspiration for all of us who had the privilege of having her in our lives. Through her tireless efforts, kindness and compassion, she leaves behind a legacy of a true humanitarian. I worked with her closely as my chief judge and later as my friend, and sought her wise counsel often. The immediate impact of her sudden loss is undeniable on both a personal and professional level.” — Hon. A. Gail Prudenti, Executive Director of the Center for Children, Families and the Law and Special Advisor to the Dean

“Judge Kaye was, in my view, the most influential chief judge in New York history. She wrote incredibly influential opinions and articles. More important, she reshaped the mission of the courts by emphasizing their role as problem-solvers in service of human needs. She was a great judge, a great leader and a great person.”
— Andrew Schepard, Senior Associate Dean for Academic Affairs and Max Schmertz Distinguished Professor of Law