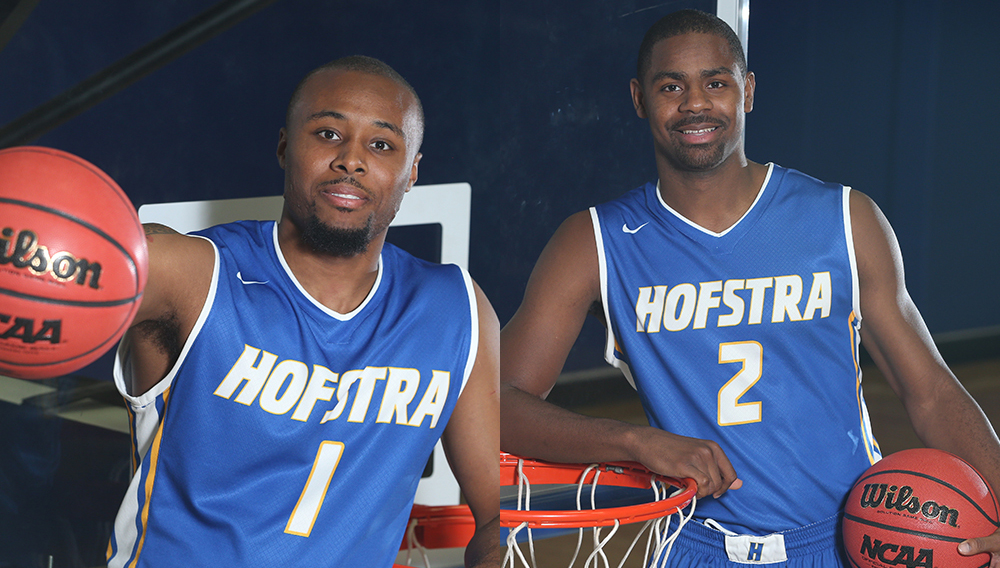 Coaches often draw upon their life experiences to better relate to their team. But Hofstra Head Coach Joe Mihalich says the give-and-take between senior guard Juan’ya Green and senior forward Ameen Tanksley reminds him of a special family dynamic.

“I’m the parent of twins, and the relationship between Ameen and Juan’ya is just uncanny,” Mihalich said. “You can tell by the way they think, the things they say; they can finish each other’s sentences. Being a father of twins, I see a lot of the same things with them.”

Mihalich, who has three sons (including twins Matt and Tony), said the chemistry is evident between the guard who is averaging more than 16 points and six assists per game and the forward who can score regularly and is capable of producing double-doubles in any given game.

The interplay between Green and Tanksley looks smooth as Green finds Tanksley near the post for an open look off a drive. The familiarity pays dividends when defenders are preoccupied by Tanksley’s 45 percent field goal shooting and team-high 17.5 points-per-game average, which gives Green the extra space he needs to create his own shot or find another open teammate.

Time and practice has seen the varied skill sets of a pair of Philadelphia natives coalesce to give Hofstra the Colonial Athletic Association’s second-highest scoring offense at 83.4 points-per-game entering Dec. 19. In three-plus seasons, the duo has amassed 108 collegiate games playing together between two programs (Niagara and Hofstra). But the partnership didn’t blossom from the initial encounter.

“When we first met each other, we didn’t see eye-to-eye,” Tanksley said. “But then we realized we are the same type of person.”

It was easier for the two to see eye-to-eye then. Long before Green grew to become the 6’2″ guard with a first-team All-CAA selection on his resume and Tanksley was a 6’5″ all-league second-team pick, the pair were simply two youth players in a precocious group of prep standouts who met at an Adidas camp.

“We didn’t know each other and Juan’ya was a top-ranked kid and I was new on the block,” Tanksley said. “We were both focusing on our own games, but eventually we started playing in games with each other and started clicking.”

Those initial games and scrimmages started what could prove to be one of the most memorable 1-2 punches in the history of the Hofstra Men’s Basketball program. The duo led the Pride to the Colonial Athletic Association Championship semifinals and a CBI appearance in their first season at Hofstra in 2014-15. That led to high expectations this season, including a CAA preseason top ranking and six wins through the first eight games to energize the fan base with conference play set to start in less than two weeks.

But before taking charge at a potential NCAA Tournament bid at Hofstra, the duo went down separate paths back in Philadelphia. Tanksley starred at Imhotep Charter, where he led the Panthers to two Pennsylvania state championships. Green continued to make a name for himself less than five miles away at Archbishop Carroll, where he nearly scored 1,500 points to set the program’s all-time record.

“I think we share similarities in that we both won’t back down from a challenge. Even in practices, we always go hard and take no mercy,” Green said.

Despite making their mark in the City of Brotherly Love at different institutions, Green and Tanksley talked often about teaming up again at college. Both wanted the challenge of leaving Philadelphia and making an impact in a new city.
“We didn’t want to stay in our hometown because we would have had a lot of friends coming to games and a lot of distractions,” Green said. “We wanted to make our mark somewhere else.”

Somewhere else was Buffalo – specifically, Niagara – which is almost 400 miles away. But while the city demographics were drastically different than home, the personality of the man in charge had the same attitude of which they were accustomed. Mihalich is a Philadelphia product and was then Niagara’s coach. A 17-year assistant coach at La Salle (where he also played), Mihalich could offer the pair an opportunity that most schools could not extend to both: the chance for each to shine right away.

“They wanted to go somewhere together, and there were probably a few schools that would take them together, but we had a genuine need at Niagara for both positions,” Mihalich said. “They could have gone somewhere else but one would have likely just sat on the bench. Our style of play and our situation was good for them and it’s been a match made in heaven.”

When Mihalich left Niagara to come to Hofstra, he wanted to take along two key starters who had helped the Purple Eagles advance to the NIT in 2013. The only drawback was that Green and Tanksley had to sit out the 2013-14 season per NCAA transfer regulations. Both players had to put ego aside and go from starting all 33 games for Niagara and averaging more than 30 minutes per game to becoming the most talented scout team in Division I for a season.

“We got stronger in the weight room and once practice time came, it was basically our game action, so we did everything we could for the team to get them ready,” Green stated.

Added Tanksley: “The year we sat out helped us see the game better. There are small things you don’t see as a player that we got to see watching film and practicing.”

When the ball was tipped in the season opener, Green and Tanksley were in warmups sitting on the bench. Unaccustomed to both the attire and the location as the game started, the two shot each other a glance before Green acknowledged the situation.

“I said ‘this doesn’t even feel right,'” Green said with a laugh. “We weren’t used to sitting on the sidelines.”

“We went from playing almost 40 minutes to no minutes and we didn’t even do anything wrong,” Tanksley chuckled.

When both could return to the court, Hofstra won 20 games for the first time since 2010-11. Green averaged 17.1 points in 36.4 minutes and compiled 220 assists to earn watch list status for the Bob Cousy Award that is given to the country’s top point guard. Tanksley averaged 16.2 points and his 5.5 rebounds per game were third on the team. He also found a rhythm from three-point range in knocking down 74 long-range shots.

“He worked so hard in the offseason shooting jumpers, and if I can get him open shots, I know that’s going to help the team,” Green said.

Tanksley said he appreciates playing with a point guard in Green who has amassed almost 600 career assists. He said the team’s slogan for the team’s primary ball-handler is simply “In ‘Yay’ we trust.”

“He’s a pro passer,” Tanksley said. “He’ll make a lot of money with his ability to pass the ball. He makes everyone around him better.”

Hofstra inducted the 1975-76 and 1999-00 men’s basketball teams into the program’s Hall of Fame in October. Both squads qualified for the NCAA Tournament. Tanksley and Green said that even though they will only play two seasons at Hofstra, the chance to leave a legacy and have that accomplishment celebrated years – and decades later – is great motivation to leave a legacy for the Pride.

“It was great to see those guys up there on the stage,” Green said. “We want to have the same thing and be able to come back 20, 30 years from now and say we won a championship and won a ring. It’ll be a great feeling.”

Hofstra will conclude the non-conference portion of the schedule with a home game against Sacred Heart on Monday, Dececember 28. The Pride will then open CAA play against Delaware on New Year’s Eve at the David S. Mack Sports and Exhibition Complex.