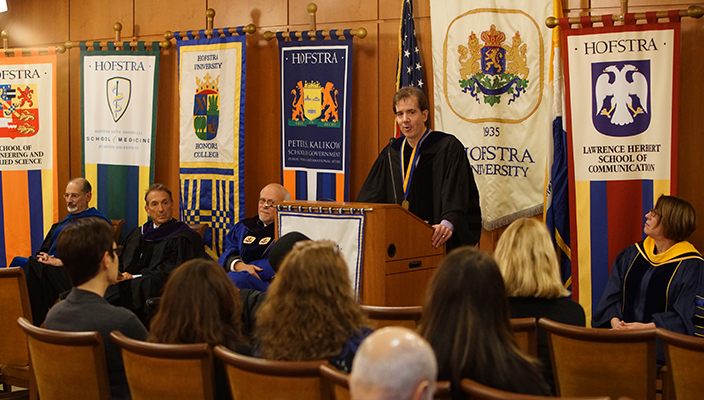 Gregory M. Maney, PhD, professor of sociology, was installed as the Harry H. Wachtel Distinguished Teaching Professor for the Study of Nonviolent Social Change in a convocation at the Hofstra University Club on Tuesday, December 8, 2015.

Presiding over the ceremony were President Stuart Rabinowitz; Provost and Senior Vice President for Academic Affairs Gail M. Simmons; Dean of Hofstra College of Liberal Arts and Sciences Bernard J. Firestone; and William B. Wachtel, who was there to represent his father and the Wachtel family. Additionally, Professor Emeritus of History Michael D’Innocenzo, the first faculty member to hold this honor, was there to speak and symbolically pass the torch to Dr. Maney.

Dr. Maney, who also serves as director for active citizenship and off-campus partnerships at the Center for Civic Engagement, is the recipient or co-recipient of research grants from several foundations, including the American Association of Colleges & Universities, the American Sociological Association, the National Science Foundation, the Sociological Initiatives Foundation and the United Station Institute of Peace. His research focuses upon peace movement discourses, the dynamics of ethno-nationalist contention, and strategies for sustaining peace processes. The findings of his research have appeared in leading peer-reviewed journals and books published by academic presses. Having served for five years as social movements section editor for Sociology Compass, he is now a member of the editorial board for the Irish Journal of Sociology.

Dr. Maney has been elected to professional leadership positions, including chair of the peace, war and social conflict section of the American Sociological Association. He is also active in community-based research projects that assist in the protection and promotion of human rights.

The Harry H. Wachtel Distinguished Teaching Professor for the Study of Nonviolent Social Change, established at Hofstra in the late 1990s, is named for the Long Island corporate lawyer who for many years acted as a confidant and legal counsel to Dr. Martin Luther King Jr. According to his obituary in The New York Times, Mr. Wachtel often met with Dr. King, traveled with him and helped arrange meetings for him with American leaders and officials, including President Lyndon B. Johnson.  He also advised Dr. King on his activities and his stand on social policies.