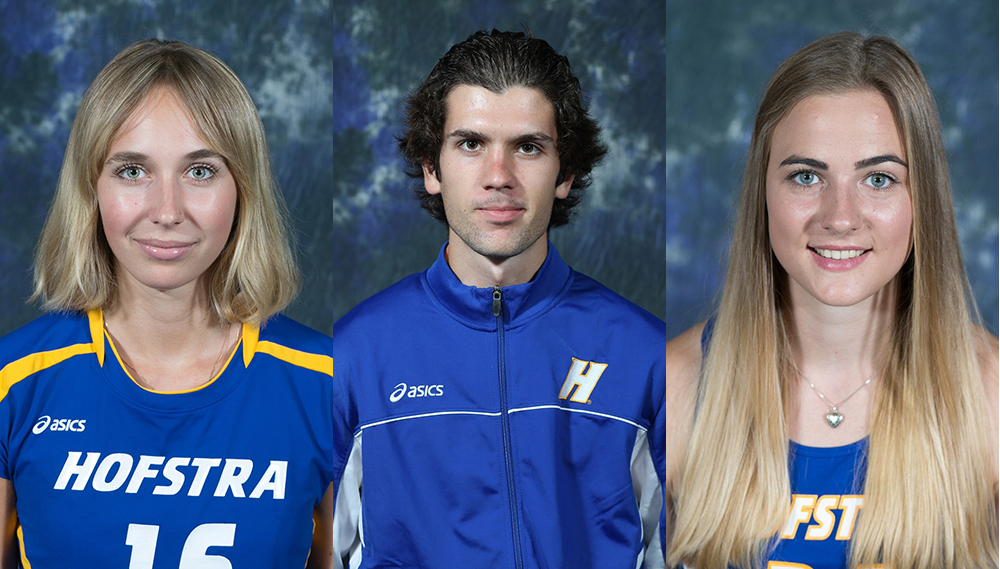 Three Hofstra student-athletes, Hannah Klemm from volleyball, Stella Schoen from field hockey and Alan Hetherington from men’s cross country, have been named recipients of the 2015 Colonial Athletic Association Scholar-Athlete Award in their respective fall sports, the conference announced on Wednesday.

“Hofstra University is incredibly proud of the work that Hannah, Stella and Alan continue to do in the classroom,” commented Hofstra Vice President and Director of Athletics Jeffrey A. Hathaway. “We are thrilled that the CAA has recognized these outstanding individuals for being true student-athletes and we look forward to our students achieving greatness in in all that they do in the classroom, in their competitive venues and in the community. I’m extremely proud that of the six student-athletes recognized from throughout the CAA, three were are from the Hofstra Family.”

All six of the fall sports honorees have cumulative grade point averages of 3.8 or higher, two received Academic All-America accolades and five were first-team all-conference selections in their various sports this season.

Klemm, a junior from Berlin, Germany, has recorded a 3.90 grade point average while majoring in marketing with a minor in Fine Arts. A member of the Dean’s List and Provost’s List at Hofstra, she is a two-time recipient of the CAA Commissioner’s Academic Award and has made the Hofstra Athletics Academic Honor Roll. On the court, Klemm was honored as the CAA Setter of the Year for the second straight season and was also a member of the All-CAA first team. She ranked second in Division I in total assists (1,493) and was ninth nationally in assists per game (11.76). Klemm also contributed 215 digs, 17 service aces and 54 blocks for the Pride this season. With a season to go, she already ranks fourth on Hofstra’s career assists list with 3,482.

Schoen, a junior from Hamburg, Germany, has a perfect 4.00 GPA while majoring in economics with a minor in psychology. A CAA Field Hockey All-Academic team selection in 2015, she is a two-time NFHCA National Academic Squad member and was chosen as a NFHCA Scholar of Distinction in 2014. Schoen made the Provost’s List in her first four semesters after achieving the perfect 4.0 GPA and has twice made the Hofstra’s annual Athletics Academic Honor Roll. On the field, Schoen received first-team All-CAA and second-team All-Mideast Region accolades this season after finishing second in the CAA with 17 goals and 41 points. She recorded 15 multiple-point contests and had three games with three goals. Schoen was also a first-team All-CAA pick in 2013 and a second-team honoree in 2014.

Hetherington, a sophomore from Oshawa, Ontario, Canada, has recorded a 3.97 GPA while majoring in biology. Named to the CAA All-Academic team in cross country this season, he is a two-time recipient of the CAA Commissioner’s Academic Award and made the Hofstra Athletics Academic Honor Roll. Hetherington placed 19th overall at the 2015 CAA Cross Country Championship where he set a new personal record with a time of 25:43 in the 8K event. It was the 11th fastest time in Hofstra history. He also clocked a personal best 10K time at the NCAA Northeast Regional where he finished in 33:47. He was the Pride’s second-best finisher in three of his five races this season.

The CAA honors one Scholar-Athlete in each of its 21 championship sports. Nominees for the award must be a starter or important reserve on their team and must have a minimum cumulative grade point average of 3.25. The winners were selected by a vote of the media relations directors at each CAA institution.