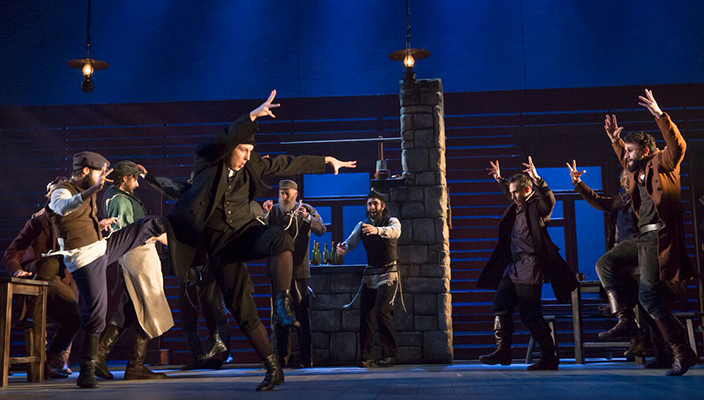 While Hofstra’s Department of Drama and Dance presented a lavish 50th anniversary production of Fiddler on the Roof earlier this fall at the John Cranford Adams Playhouse, one of its graduates, Sarah Parker ’11 (yes, that’s her, pictured front and center, above), was in rehearsal for same classic musical on the Great White Way.

Parker, an alumna of the dance program, is making her Broadway debut in the ensemble of this revival of Fiddler, directed by Tony® Award-winner Bartlett Sher and choreographed by Hofesh Shechter. “It’s such a blessing to have my childhood dream of being on Broadway and my professional dream of working with Hofesh meld into one beautiful show,” she says.

Fiddler’s special place in the Broadway musical canon is not lost on Parker. “It’s a musical that has special meaning for so many people, especially those of my grandparents’ and parents’ generation,” she says. “It’s been amazing to hear about everyone’s personal connection to it, and what scenes or songs seem to resonate most strongly with them. The themes in Fiddler of family, tradition, and a sense of community are still things that many of us consider to be important factors in our overall ability to remain happy and strong during times of change.”

Originally from Sparta, NJ, Parker has been dancing since the age of 4. “When it came time to look at colleges, I toured and applied to a few different schools that had reputable dance programs. What ultimately settled me on Hofstra was that I could not only be part of a great drama and dance department, but I could also enjoy all the other aspects of life at a university.

“I didn’t want to go to a conservatory and study only dance; I wanted the liberal-arts academic education, as well as the extra-curricular activities and campus atmosphere. Hofstra provided the perfect mix of everything.”

Though she had been very interested in musical theater while growing up, Parker explains, “Once I started at Hofstra, I was opened up to the whole world of concert dance. I quickly fell in love with the athleticism and natural quality of the more contemporary and modern styles. For me, dancing that type of movement feels truly authentic, and allows me to constantly push my physical boundaries.

“The professors in the Dance program always encouraged us to work with as many choreographers as possible and to try all different styles of dance. They didn’t try to make us copies of one another. We all had varying aesthetics and dreams of where our education would take us, and the faculty helped guide each of us on our proper paths. By the time I graduated, I really had a clear vision of the exact types of work that I was interested in and the best ways of going about finding it.”

Parker is very pleased that she continues to feel the support of her professors. “Robin Becker and Rachel List have come to many shows I’ve performed since graduating. Knowing that they are still cheering for me and interested in what I’m doing is incredibly meaningful.”

After graduating from Hofstra, Parker came to admire the work of Israeli choreographer Hofesh Shechter. “I had considered dancing for his UK-based company to be my ultimate dream; I even traveled to London a few times to attend his workshops and auditions. It was about a year ago when I first heard that he would be choreographing the Fiddler revival, and I made it a point to keep my eye out for the auditions.

“Eventually I saw the online posting for the Equity Dance Call, and even though I wasn’t currently a member of Actor’s Equity, nor did I have an agent, I went to the audition [for Fiddler] with hopes that they would have time to see me. Luckily they did, and after a few days of cuts and callbacks, I was ultimately selected as one of 12 dancers to participate in a two-week dance lab this past June. Five days later I was officially selected to move onto the Broadway production.”

Despite its emphasis on “Tradition,” this production of Fiddler has a modern sensibility. Parker says, “I think Hofesh has done a great job of taking [Jerome] Robbins’ original choreography and just kicking it up a notch … adding a little more power. The movement is really punchy and exciting but still maintains an essence of earthiness and grit. “My favorite numbers to perform are ‘Tradition’ and the ‘Wedding Dance.’ They’re some of the most iconic pieces from the show, and the music in each just radiates strength and joy.”

Parker hopes audiences will see the similarities between today’s headlines and Fiddler’s sadder moments.  “Our director, Bartlett Sher, talks to us a lot about how the story of this group of people having to leave [their village] Anatevka is strikingly similar to the refugee crisis in our world right now,” she says. “The idea of leaving your home with whatever you can carry and venturing to a new, unknown place is, unfortunately, something that groups of people around the world are experiencing all the time.”

When asked what she thinks people would be most surprised to learn about the musical, Parker answers, “How many people are actually involved in the overall production! It’s not just the onstage cast … there are endless amounts of incredibly talented people working in wardrobe, hair and makeup, set design, lighting and sound, prop, and stage management. Not to mention all of the producers, the PR team, and the orchestra and composers. It’s like many distant cousins coming together as a massive family to create the final product.”

Fiddler on the Roof is currently in previews and opens at the Broadway Theatre on Sunday, December 20.