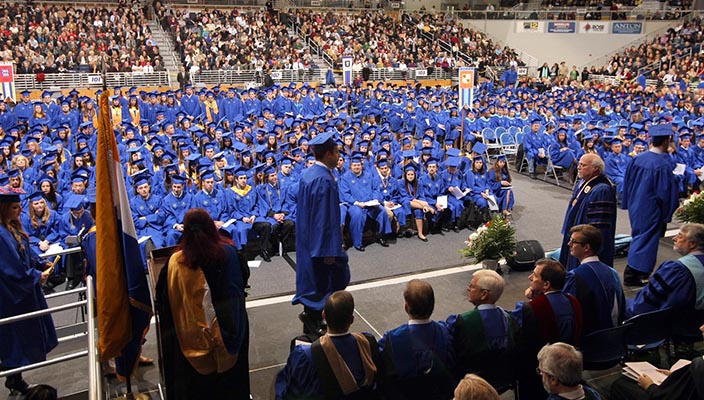 The ceremony is at the David S. Mack Sports and Exhibition Complex on the North Campus. It will be broadcast live on the web.

Kathleen C. Hochul was inaugurated as the 77th lieutenant governor of the state of New York on January 1, 2015. She was elected with Governor Andrew M. Cuomo on November 4, 2014.

Prior to her election, Lieutenant Governor Hochul was group vice president for strategic relationships at M&T Bank, serving as liaison for community matters and significant economic development projects.

From 2011 to 2013, then Congresswoman Kathleen Hochul served in the U.S. House of Representatives from New York’s 26th Congressional District. Prior to her time in Congress, she was the highest-ranking female elected official in Erie County while serving as county clerk from 2007 to 2011. The lieutenant governor also served 14 years as a Hamburg Town Councilmember.

Lieutenant Governor Hochul earned a bachelor’s degree from Syracuse University and a JD from Catholic University.  At the start of her legal career, she worked at a large firm in Washington, D.C., and later as in-house counsel to a major corporation engaged in homeland security. Kathleen Hochul then gave up private practice for public service. She was asked to serve as legal counsel and legislative assistant to Congressman John LaFalce (D-NY), and later to Senator Daniel Patrick Moynihan.

In 2006 Lieutenant Governor Hochul joined her mother and aunt in establishing the Kathleen Mary House, a transitional home for victims of domestic violence, and served on its board of directors. She also co-founded the Village Action Coalition to help local businesses survive competition from big-box stores.

The midyear ceremony will be held at the David S. Mack Sports and Exhibition Complex for undergraduates, graduates and the School of Law. Due to the seating capacity of the facility, seating is limited. Every midyear commencement candidate will receive six assigned seat tickets. As referenced above, the ceremony will also be broadcast live on the web.

The David S. Mack Sports and Exhibition Complex is wheelchair accessible on the main level and will be available for guests requiring this area. One family member may accompany those with special needs during the ceremony. Upon entrance to the Complex, please contact an usher who will be happy to escort you.

For additional information on commencement activities, such as eligibility, tickets, robing and diplomas, please visit hofstra.edu/commencement or call the Commencement office at (516) 463-4346. In the event of inclement weather please call the weather hotline (516) 463-SNOW regarding the status of the ceremony.

Meadowbrook Parkway to Exit M4 – Route 24 West (Hempstead Turnpike). Stay on 24W for about one mile. Pass Nassau Coliseum and travel under the first over head walk way. Once you pass the first over head walk way you will make your first right turn onto campus at the traffic light. Go to your second stop sign and make a right turn. The Mack Sports Complex will be a ¼ of a mile on your right hand side.