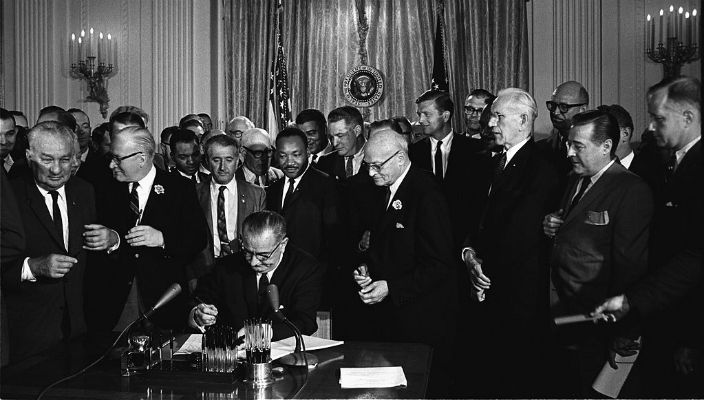 The Peter S. Kalikow Center for the Study of the American Presidency will examine the legacy of the Voting Rights Act and President Lyndon Johnson on Thursday, December 3 with a panel discussion and a keynote address by author Robert A. Caro, whose biography of Johnson won a Pulitzer Prize.

The two events — A Commemoration of the 50th Anniversary of the Voting Rights Act of 1965: The Promise and the Challenge — are presented by the Kalikow Center and Hofstra Cultural Center. Both are free and open to the public, but reservations are recommended.

The panel discussion, Understanding Personality, Leadership and Policy Making in the Lyndon Baines Johnson Presidency, will be held from 11:10 a.m. to 12:35 p.m. in the Student Center Theater, North Campus and feature Kalikow Center senior presidential fellows Howard B. Dean III and Edward J. Rollins. The discussion will be moderated by Meena Bose, director of the Kalikow Center, and Professor James Sample from the Maurice A. Deane School of Law at Hofstra University. RSVP for the panel online.

The panel discussion will also be available via live webcast.

In March 1965, just days after violence against civil rights protestors marching in Selma, Alabama, President Johnson delivered a powerful speech before Congress calling for the passage of the Voting Rights Act, which prohibited racial discrimination in voting. In August of that year, Johnson signed the landmark legislation into law.

Following the panel discussion, Robert A. Caro will deliver the keynote address, What the Hell’s the Presidency For? Lyndon Johnson and Civil Rights, from 2:20 to 3:45 p.m. in the Student Center Theater, North Campus. Caro is a two-time winner of the Pulitzer Prize known for his meticulous, exhaustively researched biographies. RSVP for the keynote address online.

The first four volumes of his biography of Johnson, The Years of Lyndon Johnson, were published over three decades (1982 – 2012). The third volume, Master of the Senate, won the 2002 Pulitzer Prize for biography. Caro is currently researching a fifth and final volume of his Johnson biography.

Caro also won a Pulitzer Prize for his biography of Robert Moses, The Power Broker. He has three times won the National Book Critics Circle Award, for Best Nonfiction Book of the Year and Best Biography, and has also won virtually every other major literary honor, including the National Book Award, the Gold Medal in Biography from the American Academy of Arts and Letters, and the Francis Parkman Prize, awarded by the Society of American Historians to the book that best “exemplifies the union of the historian and the artist.” In 2010 he received the National Humanities Medal from President Barack Obama.