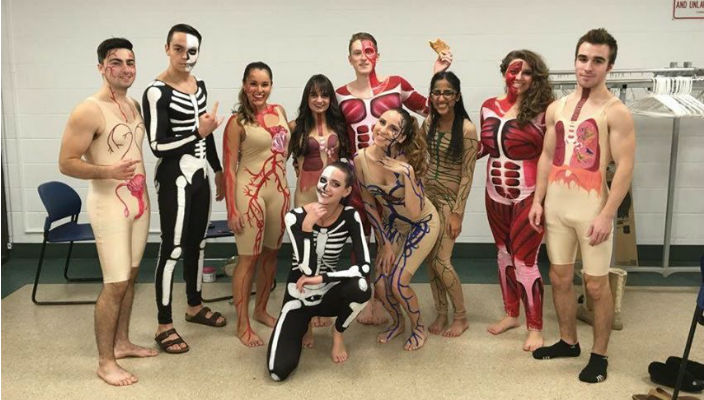 Students created and modeled suits that represented 10 body systems including the cardiovascular, skeletal, nervous, digestive and muscular systems and walked the runway during the show, which was held in the Student Center Multipurpose Room on November 13. Money raised during the show benefit the group’s charity, Children’s Miracle Network.

“In the Anatomy Fashion Show, science meets art,” said Courtney Boccio ’16, the fraternity’s secretary and a psychology major with minors in neuroscience and Spanish. “The show is well-known in the Phi Delta Epsilon community, but has never been held at Hofstra before.  It is something we have always wanted to do and we’re so glad that we were able to make that dream a reality.”

Members of the Hofstra chapter, NY Iota, are all pre-med undergraduate students interested in attending medical school and becoming physicians.  They represent majors ranging from biology to religion.

Chapter members worked together with art students to sketch and paint the body suits that were modeled.  They also organized raffle baskets and artwork for sale during the event.   Samiha Azgar’16 served as the show’s director, with Emily Culverhouse’18 as assistant director.   The event was sponsored by the Hofstra North Shore-LIJ School of Graduate Nursing and Physician Assistant Studies and Hofstra University Honors College.

“It’s a great feeling to know that all of our hard work paid off and that we were able to donate such a great amount of money from one event,” added Boccio, who modeled the respiratory system.