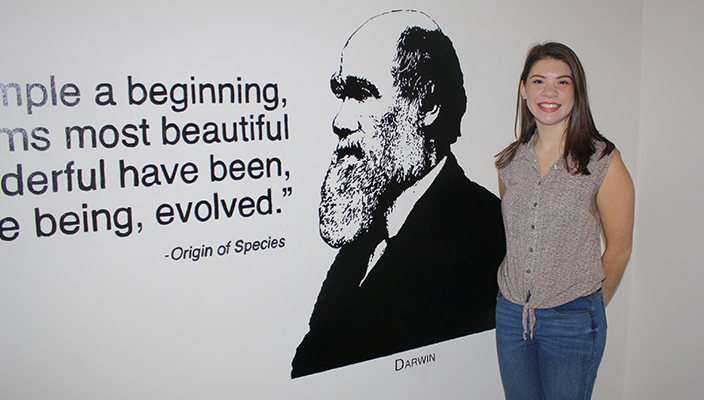 Skip the elevator the next time you visit Gittleson Hall – fine arts major Kelly DeNaples, a sophomore from Newfoundland, New Jersey, has painted 11 portraits of famous biologists and geologists to span the west stairwell of the science building.

This is a project that DeNaples has been working on since the spring of her freshman year. She was commissioned by Russell Burke, chair of the Biology Department, and Carol St. Angelo, the director of laboratories. It was their idea to turn the stairwell into a tribute to the scientists who have had the most impact on the study of biology and geology. “I took a survey among the faculty,” Dr. St. Angelo explained. “There were actually some heated arguments about who should and shouldn’t be included.” Starting with Charles Darwin, the “Father of Evolution,” the portraits climb three floors, ending with marine biologist Sylvia Earle at the top. In between are likenesses of Charles Lyell, Gregor Mendel, Francis Crick, James Watson, Rosalind Franklin, Maurice Wilkins, Rachel Carson, Barbara McClintock, and Lynn Margulis.

Professor of Fine Arts Tom Klinkowstein recommended DeNaples to Drs. Burke and St. Angelo. DeNaples, a spring 2015 Provost’s List scholar, researched each of the scientists she was asked to paint. In addition to learning about their areas of expertise, she examined a variety of formal portraits and photographs. DeNaples’ preliminary sketches of the scientists were exhibited earlier this semester at the FORM Gallery in Calkins Hall.

Though DeNaples is putting on the finishing touches to her many months of work, Dr. St. Angelo is not yet ready to end this partnership with Fine Arts. She is so excited and pleased with DeNaples’ work, she is planning a similar gallery for the east stairwell – one featuring organisms.