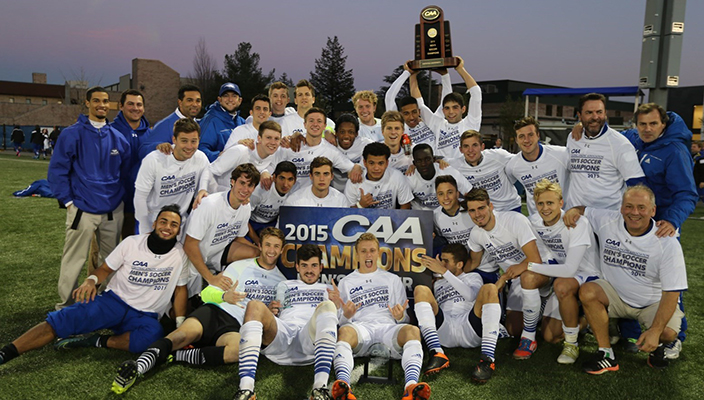 Junior Nino Alfonso netted the game-winner and reigning conference Player of the Year Joseph Holland scored with time expiring in the first half as Hofstra won the Colonial Athletic Association championship with a 2-0 victory over Delaware on Sunday afternoon at Hofstra Soccer Stadium.
BOX SCORE
PHOTO GALLERY
POSTGAME VIDEOS

Hofstra won its fourth-ever CAA championship. The program won it three straight years from 2004-06, with all four titles coming under Head Coach Richard Nuttall. The 2015 CAA Coach of the Year has led Hofstra to four of the team’s five all-time NCAA Tournament appearances. Hofstra first made the tournament in 1968 when only 16 teams qualified.

Holland earned the tournament’s Most Outstanding Player honor and Pray and defender Harri Hawkinsand Marius Flateboe were selected to the all-tournament team. Hofstra did not allow a goal in the CAA Championship, blanking JMU, 2-0 before besting the Blue Hens by the same score. Flateboe, Hawkins, Murphy and freshman Sean Nealis keyed a back line that led to two clean sheets, which brought Pray’s season shutout total to eight.

The Pride posted a shutout in the CAA Championship game for the first time since 2004 when Hofstra bested Old Dominion, 1-0.

Hofstra dominated the shot total in the opening half, putting up 14 total attempts compared to just two for Delaware. Alfonso picked a clutch time to score his first goal of the season when he headed in Murphy’s left-side cross in the 26th minute. Alfonso’s goal was his first since Sept. 4, 2014 and the second of his career, and the West Islip, New York native notched his first career postseason goal.

Holland, who earned the league’s Player of the Year award, scored for a second straight CAA Tournament game. After notching a goal against JMU in a 2-0 win in the semifinals, Holland provided one of the most exciting goals of the season in the late seconds. The officials put two seconds on the clock after time expired following a foul. Set up to the extreme-far left side outside the 18-yard box near the goal line, Holland took the free kick and beat the clock and Delaware goalkeeper Todd Morton to the top-right corner for the buzzer-beater. His team-leading eighth goal is a career-high and staked the Pride to a 2-0 edge heading into the break.

Hofstra defeated Delaware in both meetings this season. The Pride blanked the Blue Hens, 1-0, in double overtime in the regular season matchup on Oct. 10.