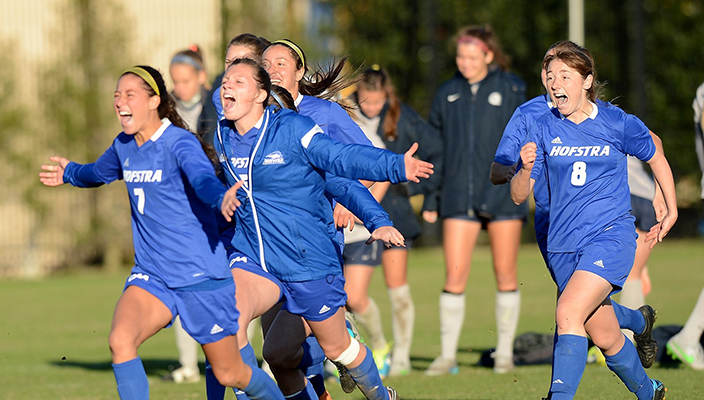 Freshman Madeline Anderson and senior Leah Galton scored Pride goals and Hofstra substitute goalie Ashley Wilson made a key save in the penalty kicks round as Hofstra and Georgetown played to a 2-2 tie in the first round of the NCAA Division I Women’s Soccer Championship at Shaw Field.
BOX SCORE
PHOTO GALLERY
POSTGAME INTERVIEW WITH COACH SIMON RIDDIOUGH

The Pride advanced to next week’s second round by topping the Hoyas, 4-2 in the penalty kicks round after 20 minutes of sudden-victory overtime couldn’t decide a victor. Hofstra will advance to the NCAA Championship second round for the third time in school history and will square off against Rutgers, a 1-0 winner over Fairleigh Dickinson, in their first round contest.

The Pride improve to 13-5-2 with what is officially a tie game in the record books. The Hoyas of Georgetown end their season with a record of 11-5-4.

After a scoreless first half which saw the Hoyas hold a slight ball possession advantage while Hofstra had the scoring opportunity advantage, the second half was a flurry of scoring. Anderson opened the scoring at the 46:40 mark following a corner kick as senior Jeannine Molleda sent a short pass in the box to Anderson who drilled a shot past senior goalie Emma Nevins. It was Anderson’s fourth goal of the season.

The Hoyas had two good opportunities in the ensuing minutes but Pride junior goalie Friederike Mehring, who made eight saves in the contest, made a save on a corner kick opportunity and junior Grace Damaska, who was a threat all day for the Pride defense, shot it over the goal in a 1v1 opportunity shortly after. But the Hoyas did tie the contest at the 54:51 mark as sophomore Chloe Knott carried the ball into the box from the right side, deaked a defender and sent a pass into graduate-student Melissa Downey, who fired a high bullet past Mehring for her fifth goal and tie the game at 1-1.

The Pride regained the lead at the 77:05 mark on a penalty kick when Galton was taken down in the box. The three-time CAA Player of the Year converted the penalty kick with a high shot to the left corner to give Hofstra a 2-1 advantage. It was Galton’s 12th goal of the season.

But Damaska, who had five shots on the day and had several scoring opportunities, finally found the back of the net at the 83:51 mark on a fine ball from senior Chrystal Thomas that sent her behind the Pride defense and 1v1 with Mehring. Damaska scored low for her eighth of the season to tie the contest at 2-2 and eventually send the contest into overtime.

Georgetown had the advantage in opportunities in overtime as Mehring made a save on a Dasmaska low shot in the first overtime and a shot from the top of the box from Downey in the second overtime. But the real story in the overtime was when Galton went down in the box with a leg injury while chasing a pass with less than two minutes to play in the first overtime. She did not return.

In the penalty kicks round, Rachel Carboz and Meghan Shaver scored for Georgetown and Jeannine Molleda and Chloe Dale scored for Hofstra in the first two rounds. In round three, Damaska’s shot was deflected by Wilson, who entered the contest for the penalty kicks, bounced off the post and went wide.Emily Agudelo then scored for Hofstra giving the Pride a 3-2 advantage. Sophomore Leah McCullough took the fourth shot for the Hoyas and shot high over the net. Pride sophomore Kristin Desmond then converted the Hofstra kick to send them to the second round against Rutgers.