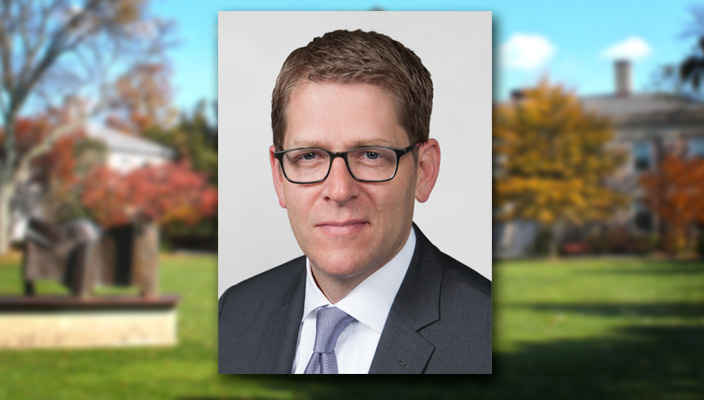 The address, “Today at the White House and Around the Globe”, is free and open to the public, but advance registration is required via online RSVP or by calling the Hofstra Cultural Center at 516-463-5669. The event will be held from 11:15 a.m. to 1 p.m.

As White House press secretary, Carney traveled the world, answering questions from the media on every subject that crossed President Barack Obama’s desk – from war and unrest in the Middle East to health care reform in the U.S., and from the 2012 re-election campaign to National Security Agency surveillance practices.

As a journalist, Carney had a distinguished career that spanned more than two decades, most of it at TIME. He covered the collapse of the U.S.S.R, the Clinton White House, and the 2000 presidential campaigns of George W. Bush and John McCain.

He was one of a few reporters aboard Air Force One with President Bush on Sept. 11, 2001, and was in the Oval Office a decade later when President Obama prepared to announce the death of Osama Bin Laden.

Carney became the nation’s 29th White House Press Secretary in January 2011 and spent a little more than four years in that position. He is a native of Virginia who earned a B.A. from Yale University.

The State of the Union Lecture series was conceived of and endowed by Ambassador Saltzman, who served the government in policy level diplomatic and economic assignments in five U.S. presidencies, including as chairman of the Blue Ribbon Committee on National Growth and Development. Saltzman, who died in January 2014, served as a member of Hofstra’s Board of Trustees from 1987 to 1994, and was a Trustee Emeritus until the time of his death.

Dr. Meena Bose on Possibility of Another Gov’t Shutdown
Celebrating the Sinatra Centenary