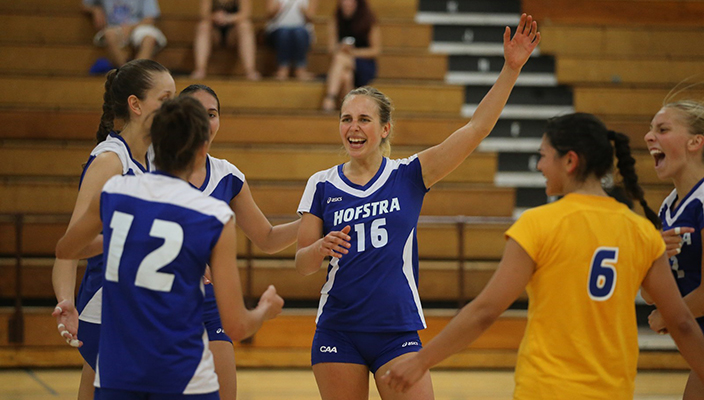 “She’s the COO of Hofstra Volleyball,” Head Coach Emily Mansur said. “She makes sure everyone understands and follows our culture. She has grown as a player and person this year and she continues to improve. Her presence alone has been huge.”

Klemm has shown you don’t need to be an abrasive, in your-face-leader a la famous executives such as Donald Trump or Steve Wynn. Klemm’s leadership role is more in the spirit of Microsoft top official Satya Nadella; where a lead-by-example approach can be just as effective as bold public declarations when it comes to galvanizing a team around a goal.

“She became a captain because she knows how to manage her time and knows what to do at a certain moment,” She has such a good personality, and the team responds to that,” Mansur said. “She makes sure to get everyone together and do things as a team. It’s not something I’m asking her to do, but she took it upon herself to bring the team together outside of practices and matches. They have become a family and Hannah is the one who primarily leads that effort.”

For Klemm, the leadership role came naturally by virtue of her position. A setter can dictate action, and Klemm frequently makes a substantial impact in that regard. Since arriving at Hofstra from Berlin, Germany, she has showed an ability to be a key part of any match. As a sophomore, she captured the CAA’s Setter of the Year award in leading Hofstra to a conference championship last season. Her 1,389 assists were the league’s highest mark and she finished fifth in Division I in assist average. But Mansur asked Klemm to do even more in handling myriad responsibilities both on and off the court in her junior campaign, which has resulted in a 17-9 overall start and an 8-3 conference record that has the Pride in contention for a regular season crown while making Klemm a prime candidate to repeat as the CAA’s top setter.

Hofstra’s roster also boasts six international players. While leadership is important to any team, helping such a large percentage of the 15-member squad acclimate to high-level collegiate athletics in a new country means the leadership from a players’ perspective in understanding those challenges can help shape the team’s overall success.

“I have a role as team captain and I think the COO term is fitting because I’m one of the voices on the team and when something goes wrong, I need to stand up. It was hard to transition to this position because back home, the role of captain isn’t as important as it is here. It’s a lot of responsibility and I’m just trying to improve. But I really appreciate how much respect Emily and the coaching staff have shown me and I want to reward that trust.”

Mansur said she recognized Klemm as having special talent when she first arrived as an assistant coach in 2013. Though she said it wasn’t her place to make drastic decisions as an assistant, Mansur noted Klemm’s skills as a freshman. The parallels between Mansur and Klemm also helped to strengthen the connection. Mansur was a setter who came from a foreign country (Brazil) and won a conference Setter of the Year award for a metropolitan New York-based Division I program (Iona).

“I’m a setter so when I first saw her, I knew she had some of the best hands I’ve ever seen. She had the gift that every setter wants to have and I knew she was going to be good. When you have those hands, it’s impossible to not be good,” Mansur said.

When Mansur took over the head coaching position in 2014, making Klemm a featured part of the attack was the first priority.

“I made the change the first day,” she said. “I knew she needed to be on the court more.”

Mansur said Klemm is working on building a strong legacy at Hofstra. Entering the week, Klemm’s 3,133 career assists are fourth on the all-time list despite having one more season of eligibility left. Shellane Ogoshi holds the all-time record of 4,597.

“To see that she has the possibility to set records, especially since she didn’t get to play much her first year, it’s exciting,” Mansur said.’

Klemm has shown an ability to do more than just facilitate the hitters. Her four double-doubles this season, highlighted by a 59-assist, 14-dig effort at Charleston, has matched the total for the rest of the Hofstra team. She credited the coaching staff, noting that Mansur’s confidence in her has helped her grow as a player.

“I love how much passion she puts into the program and how she motivates the players and tries to find new ways to help us improve,” Klemm said.

Hofstra lost three starters from last year’s championship winning squad that battled Nebraska in a NCAA Tournament first-round loss in front of 6,535 people. But going through the rigors of a victory in the CAA finals was an invaluable experience for the squad’s six returning players. Klemm’s 63 assists in the five-set championship win at Charleston was more than the Cougars’ entire team and solidified her role as one of the team’s all-time great setters. It also proved that Hofstra could handle any challenge, which the Pride will hope to carry into the 2015 CAA Championship set for Nov. 20-22.

“Last year showed us what it took to win a championship,” Klemm said. “Now we know how it’s going to be, and while every year is different, that experience was so valuable.”

Hofstra’s close proximity to the bright lights of New York City, and the potential to find internship and job opportunities in one of the world’s great financial hubs in Manhattan, helped entice Klemm to Hofstra. After not knowing much about the culture initially, she said she finds the suburban location well-suited to her academic and athletic careers.

“I only had a couple of offers and I didn’t know much about Hofstra outside of going to the website,” Klemm said. “I knew it was close to New York City, which is one of the greatest cities in the world.

“The first time I came here was pretty quiet because it was over the summer. I liked that Hofstra isn’t in the city because you don’t get too distracted. You can focus on your studies and athletics and when you want to go to the city, you always have that option.”

Klemm said she is open to any career involving marketing when she is done playing and graduates in 2017. She said she is keeping her options open and won’t dismiss any possibilities out of hand. That type of flexible thinking helped attract her to Hofstra, and the results have already positively and irrevocable impacted the history of the program.