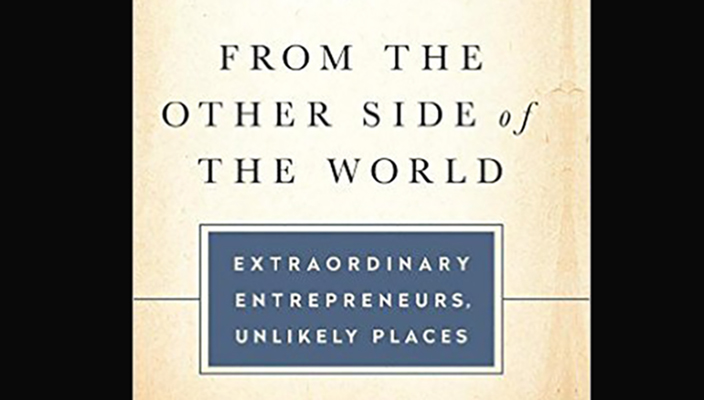 The next Steve Jobs is just as likely to come from Lagos, Acapulco, Lahore or Mumbai as from Silicon Valley, explains Elmira Bayrasli, author of From the Other Side of the World: Extraordinary Entrepreneurs, Unlikely Places. Her book, published earlier this year, looks at the growth of innovation beyond Silicon Valley, focusing on talented individuals around the world who have overcome seemingly insurmountable obstacles to lead high-growth businesses. Bayrsali will discuss this topic in depth at Hofstra University on Wednesday, November 4, at 3 p.m. at 103 Breslin Hall, South Campus. This event is free and open to the public.

Passionate about foreign affairs, entrepreneurship and writing, Bayrasli, a visiting fellow at the New America Foundation and a lecturer at New York University, has spent the past two decades working on foreign policy, international development, and with startups worldwide. In 2013 she co-founded Foreign Policy Interrupted, an education and media startup dedicated to increasing female foreign policy voices in the written and electronic press.

From 2011 to 2013 she wrote about global innovations and entrepreneurship in a weekly column titled “Entreventures” for Forbes.com. Ms. Bayrasli has also contributed to The New York Times, Wall Street Journal, Reuters, Foreign Affairs, VentureBeat, The Huffington Post, and MIT’s Innovations Journal. In 2010 she co-wrote a study on entrepreneurship, “Creating a Place for the Future,” for Pakistan’s Planning Commission.

For more information, contact Dr. Paul Fritz, associate professor of political science, at paul.fritz@hofstra.edu or 516-463-7016. This event is presented by Hofstra College of Liberal Arts and Sciences and the Peter S. Kalikow School of Government, Public Policy and International Affairs. Co-sponsors include Hofstra’s departments of Political Science, Economics, and Anthropology;  Middle Eastern and Central Asian Studies Program; and the newly launched Center for Entrepreneurship.