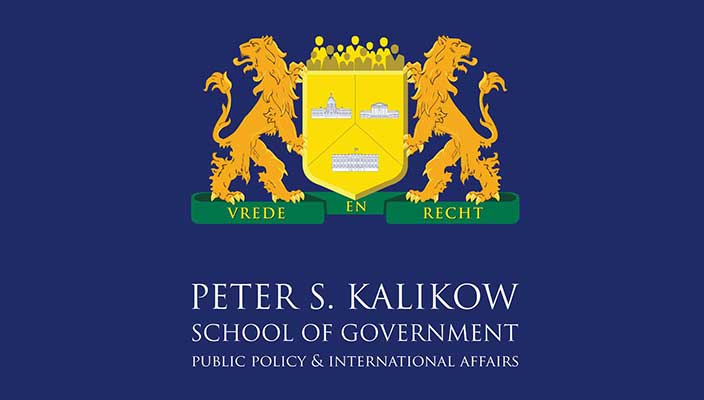 Karla Schuster
Peter S. Kalikow, a Hofstra trustee and alumnus who previously endowed a premier center for presidential studies at the university, will expand his commitment with a multimillion dollar gift that will create a new school devoted to training the next generation of public policy leaders.
The Peter S. Kalikow School of Government, Public Policy and International Affairs will incorporate eight academic departments, several interdisciplinary programs and two academic centers, including the Peter S. Kalikow Center for the Study of the American Presidency, and offer a new interdisciplinary degree in public policy and public service. His donation will bring to $12 million his support for the new school, the Kalikow presidential studies center and the endowed chair in presidential studies.

“This is a defining moment in Hofstra University’s development as a national center for the study of public policy, and in our mission to prepare students to be engaged leaders with the knowledge, creativity and understanding to meet global and local challenges,” said Hofstra President Stuart Rabinowitz.

Fifty years after Mr. Kalikow graduated from Hofstra the new school will be celebrated at an academic convocation on Monday, October 26, 2015 at 11 a.m. in the Student Center Theater, Sondra and David S. Mack Student Center, North Campus.

“The naming of a school after an individual is among the highest honors a University can bestow,” President Rabinowitz said. “Peter Kalikow’s dedication to Hofstra as an alumnus, trustee and benefactor, his embrace of presidential and political history, and his business acumen have been invaluable in guiding the growth of this institution.”

In 2006, Kalikow endowed an academic chair in presidential studies and the Peter S. Kalikow presidential studies center. The center is nationally recognized for its research and scholarship about the nation’s highest office, as well as its senior presidential fellows, former Democratic National Committee Chairman Howard B. Dean III and Republican political strategist Edward J. Rollins. The Kalikow Center was a major participant in the activities and programs connected to Hofstra hosting presidential debates in 2008 and 2012.

Mr. Kalikow observed, “In an era of political discord a strong democracy rests upon the shoulders of an engaged, educated and thoughtful citizenry. This effort will ensure that the BA degree in Public Policy and Public Service will prepare students for careers in government, non-government organizations, think-tanks, advocacy groups and a broad spectrum of endeavors where knowledge of public policy and how it is made is critical.

“Focusing on undergraduates, the school will be truly interdisciplinary – involving programs and courses from throughout the Hofstra campus, including political science, economics, statistics, social justice and human rights.  And for those who do not pursue a career in this arena, courses within the school will simply make them better citizens – citizens capable of understanding important issues facing our nation and citizens better able to participate in the experiment we call democracy,” Mr. Kalikow concluded.

Kalikow earned a B.S. in business administration from Hofstra in 1965 and was awarded an honorary doctorate of law degree in 1986. He was named the university’s Alumnus of the Year in 1988, received a presidential medal in 1999 and was honored at Hofstra’s Annual Gala in 2009.

He is president of H.J. Kalikow & Company, LLC, one of New York City’s leading real estate firms, is the former owner and publisher of the New York Post, and a former chairman of the Metropolitan Transportation Authority (MTA).

The new Kalikow School will be one of the 12 schools at Hofstra and comprise eight academic departments: anthropology, economics, global studies and geography, history, philosophy, political science, religion and sociology. It will also house 12 interdisciplinary programs, as well as the Center for Labor and Democracy and the Kalikow presidential studies center.

The diverse mix of disciplines housed in the new school will offer students a synthesized academic experience that represents a more expansive approach to the study and practice of public policy.

“Public policy and public service require an understanding of how and where different issues and fields of study intersect,” said Hofstra College of Liberal Arts and Sciences Dean Bernard Firestone. “The Kalikow School reflects the world we live in, which is multi-disciplinary, collaborative and complex.”

Fall Career Fair to Bring 100+Recruiters to Campus
Solved! September and October Problems of the Month