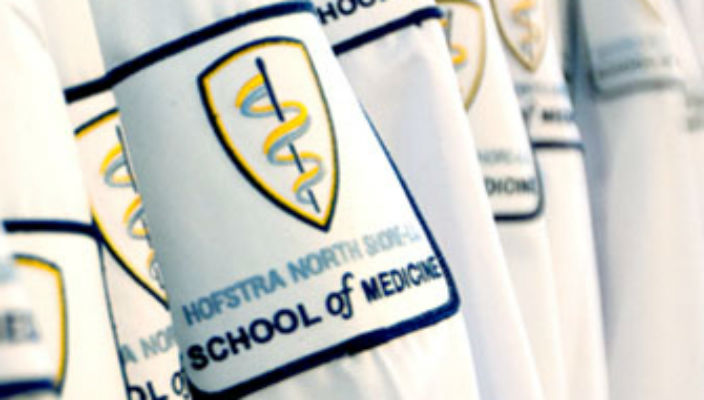 “The white coat is an important symbol for first-year medical students on the path to becoming physicians,” said Veronica Catanese, MD, MBA, Vice Dean and Dean for Academic Affairs at the School of Medicine. “It marks the beginning of a lifelong journey of discovery, filled with challenges, privileges and responsibilities, and of transition from an individual to a professional.”

David Battinelli, MD, Dean for Medical Education, ceremoniously draped the 54 women and 48 men of the Class of 2019. The newly robed students then received two pins from Dr. Rona Woldenberg, MD, FACR, Associate Dean for Admissions. The New York State emergency medical technician (EMT) pin recognizes completion of EMT training, a critical component of the first two months of study at the School of Medicine. The second pin, that of the Gold Foundation for Humanism in Medicine, encapsulates the symbolism of the ceremony itself.

“As you achieve this first milestone in the path to becoming a physician,” said Dr. Smith during his ceremony speech, “be forever mindful that the journey is sometimes painful, always tiring, but extremely rewarding.”

The Class of 2019, ranging in age from 21 to 40 years old, is the School of Medicine’s fifth class to receive white coats since opening its doors in 2008.  And, like their upper classmates, the newly minted medical students represent all socio-economic backgrounds, regions, and walks of life, including those switching careers and embarking on the road not taken.

“I had always been fascinated in the science of how food and wine is made and come together into something that people enjoy and remember,” said first-year med student David Pflaum, who attended culinary school after finishing college with a dual degree in anthropology and religion. “While working as a chef in New York, I developed an interest in wine-making and went on to run a winery in California, but it just wasn’t enough.”

When life took an unexpected turn and Pflaum was faced with helping his then-girlfriend cope with cancer, the decision about what to do professionally became clear. “That experience was such an eye-opener,” said Pflaum. “I see medicine as the perfect way to combine my passion for science and people–and also make a difference. Now I’m here at the School of Medicine; I’m here to stay.”

While some are changing careers, other first-year students are learning to balance the demands of medical school and parenthood.  “The program at the School of Medicine is very accommodating and supportive,” said Yangyang “Michelle” Shu, first-year medical student, mom of a 4-year-old, and a physical therapist on her way to fulfilling a lifelong dream of becoming a doctor. “I’m proud to have my family with me to share in this moment today.”

The tradition of the White Coat Ceremony began in 1993 at Columbia University College of Physicians and Surgeons by the Arnold P. Gold Foundation. Dr. Gold, a teacher and pediatric neurologist for more than 40 years at Columbia, noted at the 1991 commencement ceremony that students were reciting the Hippocratic Oath “four years too late.” Dr. Gold believed that it was much more apropos for students to receive their white coats and take the Oath when they begin their medical training, particularly given that the initial years of training include first contact with patients.