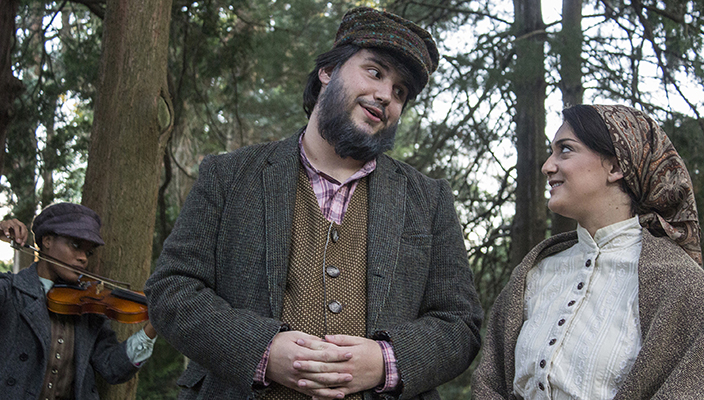 A great classic musical for over 50 years, Fiddler on the Roof, Sholom Aleichim’s iconic tale of Tevye and his daughters set in early 20th century Russia, bursts onto Hofstra University’s John Cranford Adams Playhouse, accompanied by its much beloved and beautiful score. Professor Cindy Rosenthal, who once played Chava to Theodore Bikel’s Tevye, directs this production presented by the Department of Drama and Dance, October 23-November 1.

Tickets are $15, $12 senior citizen (over 65) or matriculated non-Hofstra student with ID. For more information, call the Hofstra Box Office at 516-463-6644 Monday-Friday, 11 a.m.-3:45 p.m. Tickets can also be purchased at HofstraTickets.com. If seats are available, tickets will also be sold at the door starting 90 minutes prior to show time. 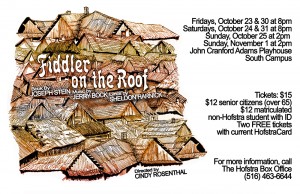 In addition to Professor Rosenthal who starred in an East Coast tour of the musical, Andrew Abrams, the musical director, and Stas Kmiec, the choreographer, also worked with Theodore Bikel on different productions of Fiddler. Bikel, who died this past summer, played Tevye approximately 2,000 times – more than any other actor. Professor Rosenthal has dedicated this Hofstra production to his memory.

In her director’s notes, Professor Rosenthal writes, “You may ask – Why Fiddler now? How does this 1960s-era musical – often regarded as the last of the golden age musicals – speak to audiences today? … The themes that charged through the original production – family and community conflicts based on the break-down of traditional authority structures, the creation of new rules and rituals, shifts in gender, class, race and power relationships – are again very much a part of our lives and in the news daily.

“We face a world of torn-apart Anatevkas and thousands of immigrants seeking a better life. In the beautiful refrains of this wonder-full musical we hope you will hear the voices and the songs of refugees with fresh ears. We acknowledge our debt to our immigrant forebears – to their struggles and to their achievements.”