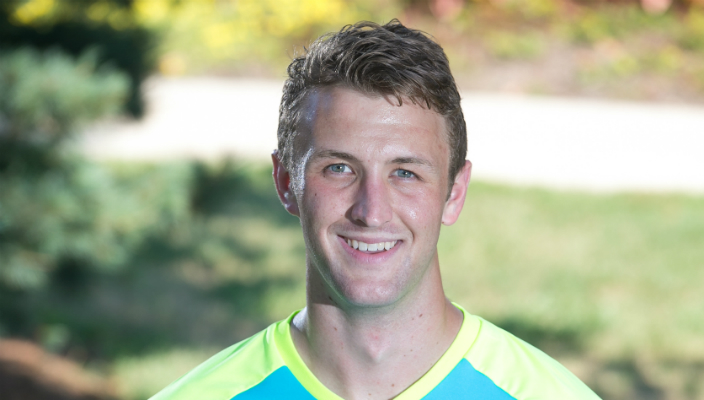 Goalkeepers can take a narrow view of their surrounding by nature of their job responsibilities. Keeping a ball out of the eight-by-eight goal frame inside of an 18-yard box is a big enough task that a netminder doesn’t need to think in terms of other units of distance.

But while success for Pride senior Patric Pray has involved his ability to make key stops in tight spaces, his very presence wearing a Hofstra uniform came thanks to a relationship forged between two men who met more than 3,300 miles away.

Pray spent his first collegiate season as a backup on the University of Washington roster in 2012. But the Chandler, Arizona native was looking for a new opportunity after the season and talked to his old club coach, Mark Lowe. Lowe started his playing career for Barnsley FC Youth, which is in the hometown shared by Hofstra Head Coach Richard Nuttall. Nuttall taught Lowe before coming to the United States, setting up a move three decades later that has Hofstra in contention for its first NCAA Tournament berth since 2006.

With a strong endorsement of Lowe and his staff, Pray saw the Pride’s roster was in need of a goalkeeper and sent Nuttall an email. An invitation to Hempstead quickly followed.

“The first thing I noticed was the large number of Europeans,” Pray said. “It was such a diverse team and the coaching staff has so much experience.”

Moving to the East Coast was an adjustment for someone who had never played in a collegiate game. To ease the transition, Pray started 2013 as Roberto Pellegrini’s backup. But an injury forced Pray into action, and he responded by notching three consecutive shutouts in his first three starts, including a clean sheet against Rutgers and UNCW in his Colonial Athletic Association debut as part of a 5-2-1 showing and four shutouts. His first start, versus New Hampshire, featured a three-save blanking that fulfilled one of his career goals.

“When I started playing in college it was a dream to walk on the field and have your name announced for a Division I program and to top it off with a shutout, you couldn’t have imagined a better opportunity.”

Pray has already helped Hofstra earn wins over nationally ranked Syracuse and UNCW this season, helping the Pride climb as high as 17th in the NSCAA polls. Besides the cumulative shutout total, Pray (19-7-4 career record) will look to secure a legacy by leading the Pride to the team’s first CAA championship in nine years.

“One of the things all players hope to do is set some records and make a lasting impression,” Pray said. “I try to just do my job and my defense has made me look good.”

A veteran group in front of Pray has helped Hofstra hold teams to just one-goal per game. Senior defender Daniel Grundei has led the way with dynamic play from the center-back position. Junior Rory Murphy has also been a key component on the backline, joining senior Marius Flateboe, junior Harri Hawkins, freshman Sean Nealis and versatile junior threat Nino Alfonso to limit scoring chances. Nuttall cited the symbiotic relationship between a quality goalkeeper and a hard-working back line as entities that have pushed each other to improve.

“He’s such a good shot stopper, which automatically means there is less pressure on all of the defenders,” Murphy said.  “We know that if we mess up, then Paddy is behind us, which makes us more confident as players. He communicates well with the whole back line and commands us on where we should be from a position standup, and he gives great encouragement throughout the game. He’s also good at coming out for crosses. That takes pressure off of us, especially in the closing stages of games.”

Pray has worked hard to juggle the responsibilities of being a starting goalkeeper and a finance major. Pray will graduate in December and completed a summer internship with German chemical company BASF as a controlling assistant who prepared monthly reports regarding business performance.

Nuttall said Pray showed talent despite arriving on campus without a single game of collegiate experience. He credited the same work ethic and initiative that led to his student’s academic and business-world success as the reasons for on-field improvement as well.

“His work ethic is second to none and he deserves every amount of success he gets,” Nuttall said. “He was always a good shot-stopper but his general soccer IQ has improved and his confidence has grown. His positioning is a lot better and he’s improved his footwork.”

The current campaign matched Pray with a new position coach.  Former MLS goalkeeper Brian Edwards led Wake Forest to a national championship in 2007 and is a former All-ACC First Team netminder. Edwards, a 2008 MLS SuperDraft second-round pick, said Pray’s situational awareness on the field, his ability to set the defense and his propensity for big spots is a big reason why Hofstra has started 6-0 when scoring the first goal.

“His confidence has improved tremendously and he’s one of our biggest leaders,” Edwards said. “That first weekend, some of the saves he made against Syracuse that really set the tone for the season.

“The team knows if something happens, he has their back, and that goes a really long way. His athleticism and strength, the way he works in the weight room, it allows him to make those (athletic) saves. We know as coaches we can rely on him every game. That allows us to put some players in different areas and take more chances because of Patric and our back line.”

Grundei was a captain at Towson before transferring to Hofstra. Pray could relate to the challenges of going to a new school and the two have linked well to help the Pride allow an average of just one goal per game this season. Pray said playing with an experienced back line makes it easier to direct personnel on the pitch.

“Most of them are older players and they know what they’re doing,” Pray said. “They coordinate really well; they listen to me when I’m trying to organize and they are on top of things with each other.”

Added Murphy: “He’s vocal and that makes him a good leader on the field. Off the field he is quieter, but very respected. He’s very professional in everything he does which sets a high standard for everyone else to follow.”

Pray said he had never been to New York City before coming to Hofstra. Thanks to his experience going to school less than 30 miles away from many corporate headquarters in Manhattan, he now will look to leave a mark in the Big Apple both in soccer and in the business world.