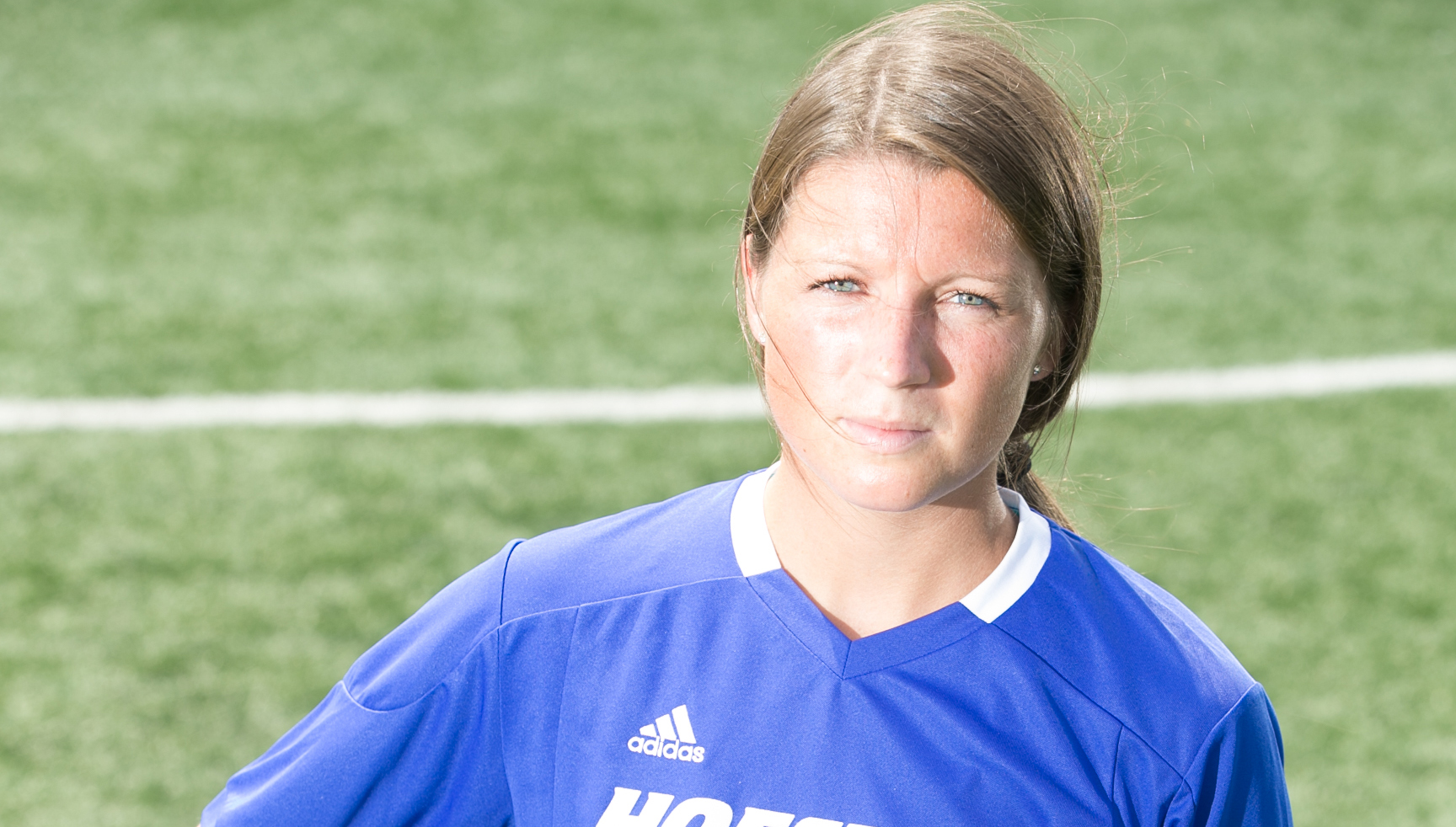 There are certain terms in sports that signify a lofty status and serve as validation of a player’s value and talent. In baseball, a five-tool player is someone who can impact a game’s every facet. For soccer midfielders, being labeled a true box-to-box player represents the same ideal: someone who can help dictate play no matter the location of the action.

Hofstra junior Jill Mulholland showed she could play a strong two-way game when she exploded onto the collegiate season as a first-year standout in 2012. The local product from Levittown, New York formed one of the best freshmen classes ever by teaming with eventual two-time Colonial Athletic Association Player of the Year Leah Galton, four-year starter Chloe Dale and Jeannine Molleda. The quartet was a major part of that 2012 CAA championship team.

Mulholland’s stellar freshman season comprised six goals and five assists in starting all 22 games, earning her a First-Team All-CAA selection. That set expectations high entering the next two seasons, though injuries put a dent in those plans as leg problems limited her to just three games in 2013 and seven in 2014. She took a redshirt following the shortened sophomore season and is classified as a junior in 2015 with one more season of eligibility following the current campaign.

Despite logging just 10 games in the last two years combined, Mulholland has looked strong through the first eight games of 2015. Her six points is good for third on the team and has included a game-winning strike to help Hofstra race to a 5-3 start.

“To be honest when I practice with her and play with her on the field, you can’t even tell she’s been out of the game for mostly two seasons,” Galton said. “She’s fitter, stronger and even more intelligent on the field. Teams need to watch out since she is such a dangerous player. She plays such a strong two-way game.”

The only opposition that has found a way to stymie that all-around ability has been injuries. An emotional Mulholland needed to be helped off the field in the 2013 home opener versus North Dakota State, ending her season after just three contests. But a difficult rehab and a medical redshirt allowed her to come back in time for the next season, putting her on the field and in her familiar center-midfield spot almost a calendar year later.

Mulholland bounced back to score four goals and compile two assists in seven games in 2014, including her first career multi-goal game in a two-score effort versus Indiana State and a goal against Duke. But another leg injury forced her out of the Virginia game on Sept. 14 and ended her season before October for a second straight year.

This season, Mulholland again came back with a positive attitude and this time sported a new number, switching from No. 17 to No. 5.

“I wasn’t nervous to get hurt again, but I just worked every day to get better in practice,” Mulholland said.  “I take every game like it’s my last now, because you’ll never know if you’ll get hurt again. I definitely appreciate the chance to play more now than when I started.”

Mulholland hasn’t played with any hesitation since returning, helping Hofstra out-score teams, 19-13, while scoring two goals in 11 minutes to power the Pride to a 4-0 win over CCSU earlier this month. She has also helped the Pride post two shutouts by contributing on the defensive end.

“Everyone’s uplifted by her return and gives the team extra confidence knowing she’s on the field,” Hofstra Head Coach Simon Riddiough said. “She has the ability to carry the team when needed.

“She’s a blue-collar, no-nonsense type of player who isn’t afraid of anything. She wants to make big plays and will go make the tackles no one else will. Sometimes, that causes (injury) problems but she can’t adjust her game. That’s what makes her special.”

Mulholland’s ability to fight for the ball has given Hofstra possession advantages in the majority of games in which she’s played. It has also allowed Galton opportunities to thrive in the attacking end. Galton has scored six goals and registered 13 points in seven games and is just three points away from tying Hofstra’s all-time mark at 108. The acclaimed forward credited Mulholland’s play at midfield with facilitating her high production stalking the pitch’s left flank. The teamwork has helped Hofstra score at least three goals in three games this season.

“Jill’s style of play is like no one else,” Galton said. “I have never played with an attacking midfielder who is anywhere near her standard. She creates countless opportunities not only for herself but for the forwards on the team, too. Her passing ability is unbelievable and her crossing and shooting just as good. She’s an all-around great player, and it’s been amazing to play with her.”

Mulholland knows the time to win with her classmates is short. Though she can return in 2016, Galton, Dale and Molleda are looking to end their senior seasons by capturing another CAA title after falling just short to Northeastern in the league’s championship game last season.

Beyond statistics, Mulholland’s teammates and coaches cited her leadership as something that has helped the Pride post winning records in every season she has been on the team.

“Everybody respects her as a player and a person,” Riddiough said. “They trust and believe in her. She can carry the team at times and everyone responds to her.”

Before arriving at Hofstra, Mulholland was a standout at nearby MacArthur High School, where she earned NSCAA All-American honor and the Class AA Co-Player of the Year in 2011 by scoring 17 goals and adding 11 assists in the Generals’ deep playoff run. After leading MacArthur to its first state title as a forward, Mulholland stayed local and moved to midfield to accommodate Hofstra’s perennial deep crop of talented forwards.

Despite moving from forward, Mulholland said the ability to play close to home and the rapport developed with Riddiough made the decision to go west down Hempstead Turnpike an easy one.

“I knew about Hofstra when I was younger from my club teams,” Mulholland said. “I thought about going away, but being close to my family is a plus. I love going home and spending time with them. The best part of playing here is I get to go home when I want and I have my teammates over as well.”

Her selflessness in changing positions as well as helping teammates has helped win over veteran players and youngsters alike. Freshman defender Madeline Anderson had a similar background to Mulholland in starring for a Long Island high school and starting for Hofstra from Opening Day of her freshman year. Anderson, a Westbury native, earned a starting spot in the back line after a great career for W.T. Clarke and said Mulholland’s assistance made the transition much easier.

“She’s my big sister,” Anderson said. “She’s made me feel so welcomed and has pushed me in practice. She’s also given me a lot of guidance off the field.”

Galton said Mulholland has been a big part of her collegiate experience and looks forward to the challenging of winning the team’s fourth-ever CAA title before graduating this May.

“She’s very professional in her game day routines and she’s a great example of how the younger players should aspire to be,” Galton said. “I’m going to miss playing alongside her so much. She’s changed the way I play and I’m forever going to be thankful to her for that, but she’s back for this season and that’s all that matters.”

Mulholland needs just three more goals to match her career high and with 34 shots is already closing in on her personal-best mark of 46 set in 2012. Hofstra will resume play on Sunday versus Fordham at 2 p.m. in the final non-conference matchup of the season.