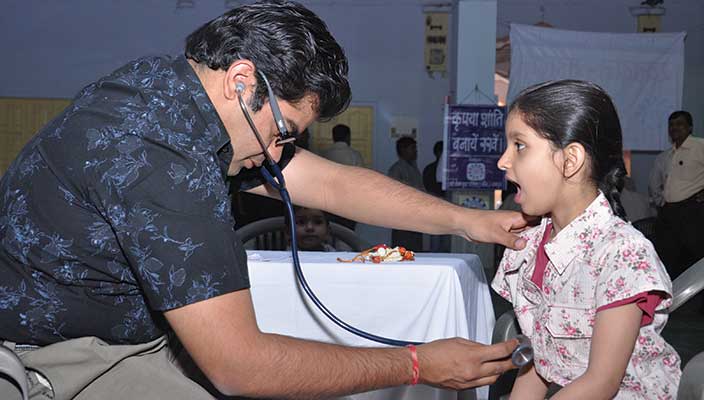 In the two years it took physician Akshat Jain to earn a Master of Public Health from Hofstra’s School of Health Professions and Human Services, he made three trips to his native India to put theory into practice, working on community-based initiatives aimed at preventing widespread disease, promoting cancer care, and limiting lead exposure. During his last trip, in December 2014, Jain is credited with helping curb an epidemic of dengue fever in Rajasthan, the state in northern India where he grew up.  Concerned by an alarming rise in the number of new dengue fever cases, he felt “a desperate urge to create a program that would be of help.”

Jain, 32, mobilized a team of local health experts to educate the public about simple ways to prevent the mosquito-borne virus, which can lead to high fever, dehydration, internal bleeding and, if left untreated, death. The team worked with local and national media outlets to encourage blood drives and remind residents to stay hydrated and wipe away dripping or stagnant water from pipes, pumps, and household cooling systems – rich breeding grounds for mosquitoes. Jain also called on government officials to take steps such as spraying mosquito repellent on susceptible areas and covering wells to reduce infestation.

“Now that I have my MPH, it gives me the real skill set to create programs in developing countries where I can understand the social culture and barriers. As an oncologist, I would treat 20 to 30 patients a year and make some meaningful changes for them, but as a public health professional, if you create a policy that impacts a whole generation and makes a difference in the quality of life and survival – such as vaccination, immunization, lead screening – I think that this is a greater service to humanity.” — Akshat Jain

His work against dengue fever was just the latest in a string of charitable projects that Jain has developed to improve the health of communities in India and around the world.

Akshat Jain is a third-year pediatric fellow treating childhood cancers at Steven and Alexandra Cohen Children’s Medical Center in New Hyde Park, part of the North Shore-LIJ Health System. He also teaches on the pediatric faculty of the Hofstra North Shore-LIJ School of Medicine. His interest in oncology and hematology – and in public health – stems from his childhood in Rajasthan.

“I grew up with a friend in the neighborhood who would always be on the sidelines whenever we played, and I asked my mother why,” he recalls. “She said he had hemophilia, a blood disorder, and if he were to get hit or injured, it could be life-threatening, and his parents would have to sell their house to afford the expensive medicines he would need.”

The explanation left the young Jain, who had to limit his own activities because of bronchial asthma, with questions about why there weren’t better ways to help kids like them. It motivated him to eventually pursue medicine as a career – just like his father had, treating patients for free at a charity clinic in the region. “I saw the blessings and goodwill he got from the people he served,” he said.

During his years as a medical resident in Manhattan between 2008 and 2011, he created his first nonprofit, Prarabdha (meaning “good karma” in Hindi), which collected viable, near-expiry medical supplies from local hospitals and sent them to developing countries in need, such as Haiti after its devastating 2010 earthquake.

“When I went back to visit India after my residency, I saw how much more work still needed to be done there,” Jain said. He began a community project to screen children who were at high risk for lead poisoning, which can irreversibly damage brain cells and cause learning disabilities. The experience taught him firsthand the difficulties of both effectively educating the public and garnering the interest of stakeholders who could help support the program -– and he realized he needed advanced training if he really wanted to establish programs that would bring about lasting change.

“Creating a public health program from scratch is not easy; almost anything can go wrong and lead to disaster,” he said.  “There is accountability involved in a program or policy that impacts a wide range of people. It was important that I learned the science of public health.”

“Akshat recognizes the critical importance of social, behavioral, economic, environmental and political forces and works on all those levels to effect change. His passion for helping those most underserved is evident in everything he does.” — Corinne Kyriacou, PhD Director of the Master of Public Health Program

Already familiar with Hofstra’s campus and reputation, he enrolled in the Master of Public Health (MPH) program, which was launched in 2012.

Jain was especially impressed with the MPH program’s emphasis on interdisciplinary learning that drew on experts from all over the University. “We had professors of such diverse specialties in the liberal arts and law, as well as the sciences, that it really opened up a broader horizon of thinking for me.”

Janet Dolgin, a distinguished professor of health care law at the Maurice A. Deane School of Law – who also serves as co-director of the Hofstra Bioethics Center and director of the Gitenstein Institute for Health Law and Policy – taught Jain in her public health law course.

“Akshat added a marvelous voice to the seminar – a compassionate, thoughtful voice informed by clinical expertise,” Professor Dolgin said. “He challenged the law students to consider and re-consider the ground on which legal determinations are shaped. Akshat is smart and deeply committed to health care and population health, and he is very likely to become an important player on the global public health stage.”

Jain is now most passionate about his work over the last 18 months helping people with cancer in India, which has been the focus of his graduate thesis. He learned that survival rates for curable cancers were dropping because up to 50 percent of patients from poor families were abandoning cancer treatment, despite free government-sponsored hospital care. Deeply disturbed by the statistics, he began a scientific study to understand why.

The results showed that poorer families often couldn’t afford to pay for multiple trips to the hospital or didn’t fully understand the treatment, with some believing they had been cured after just one chemotherapy session.

Jain and his team worked with political leaders to pass legislation to provide free transportation to families below the poverty line and assigned a social worker to follow through with every patient.

“In the next six months to a year, we expect to see a great improvement in the health prospects for these patients,” he said. “This is real public health in action.”

MPH Program Director Corinne Kyriacou, PhD, who is a co-author on Jain’s study, notes that he used his clinical, public health, and research skills in his work in India. “Akshat recognizes the critical importance of social, behavioral, economic, environmental and political forces and works on all those levels to effect change,” she said. “His passion for helping those most underserved is evident in everything he does.”

Jain, who is already a consultant on task forces for the American Cancer Society, American Academy of Pediatrics, and Harvard University’s global health programs, hopes to return to India with his wife, Ginee, and infant daughter, Ayana, in another five or six years to work full-time on public health initiatives. Ginee Jain, a dentist and epidemiologist, has often collaborated with her husband on projects and shares his passion.

“Now that I have my MPH, it gives me the real skill set to create programs in developing countries where I can understand the social culture and barriers,” said Jain, who is also helping build the MPH’s global health internship program so that more students can work abroad. “As an oncologist, I would treat 20 to 30 patients a year and make some meaningful changes for them, but as a public health professional, if you create a policy that impacts a whole generation and makes a difference in the quality of life and survival – such as vaccination, immunization, lead screening – I think that this is a greater service to humanity.”