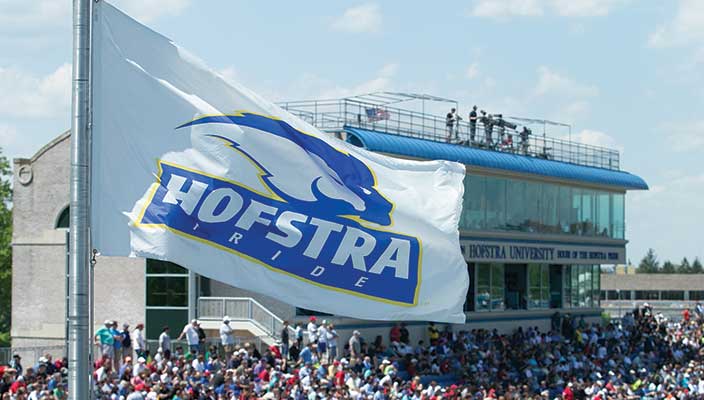 Awards in sports are not always a meritocracy. Fans stuff cyber ballot  boxes to help their favorite players earn All-Star bids. Past performance and name recognition can sometimes help an established athlete win accolades over an emerging standout.

But for the five Hofstra student-athletes who won the Colonial Athletic Association Player of the Year award in 2014-15, the distinction comes from those who perhaps know and respect their talents most – rival coaches (only head coaches in the conference can vote for the Player of the Year award, and no coach is allowed to select their own player). Kelsie Wills (volleyball), Brittain Altomare (women’s lacrosse), Jonel Boileau (field hockey),  Leah Galton (women’s soccer) and Sam Llinares (men’s lacrosse) were chosen as the best player in the league in their respective sports, highlighting an impressive Hofstra Athletics season. “It’s a tribute to the caliber of student-athletes and the Athletic Department as a whole,” Boileau said. “We couldn’t have done it without our teammates, coaches and the administrators who all play major roles in our experiences at Hofstra.”

Five winners are the most Hofstra has had in a single year since joining the CAA. It is also the most in Hofstra Vice President and Director of Athletics Jeffrey A. Hathaway’s tenure. And individual success begot team success, with volleyball’s thrilling five-set win at Charleston locking up the conference championship and an NCAA Tournament berth.

“Without a doubt I’ve seen a significant increase in the quality of Hofstra Athletics over the past year, and the success this past season can be attributed to the continuous improvement and work done behind the scenes as well as on the court,” said Wills, who capped her storied career as the program’s all-time leader in kills with 1,942. “I think I speak for all the Player of the Year winners in saying we have a fantastic athletic community.”

Athletic prowess isn’t the only characteristic that defined the quintet. Boileau and Wills were also chosen as CAA scholar-athletes in their respective sports. Altomare, a product of Wolfsville, MD, graduated in the spring with a degree in linguistics and childhood education. She accepted a job at the nonprofit Harlem Lacrosse and Leadership program, working to bring lacrosse to inner cities and helping children secure admission to prestigious prep schools and universities.

“We have the most amazing Athletic Department at Hofstra, and Jonel and Kelsie earning scholar-athlete awards is even more impressive than the incredible honor of being a CAA Player of the Year,” Altomare said. “The athletic community is so tight-knit. The support is unparalleled.”

Boileau and Wills also graduated in May following stellar careers. Wills earned a degree in accounting with a minor in finance, though she hopes to continue her volleyball career as a professional in Europe. Wills was part of two CAA championship seasons in 2012 and 2014, capping her career as an American Volleyball Coaches Association (AVCA) All-America selection. That makes her one of just two players in program history to be named an AVCA All-American. Wills was also just the seventh player in school history to earn all-region accolades.

The outside hitter from Matamata, New Zealand, is one of only six players to total at least 1,000 career kills and 1,000 career digs as she picked up 1,226 digs during her four seasons at Hofstra. She is also the first player with three seasons of 500 or more kills.

“All the accolades and statistics I have accomplished without a doubt mean a great deal more now than they did at the moment,” Wills said. “I didn’t have any focus toward achieving particular numbers during the season, so to be able to look back and see I made some history is very satisfying.”

Boileau, a forward from Kelowna, British Columbia, graduated with a degree in international business. She will continue her field hockey career as a graduate assistant coach at the University of Massachusetts, where she will pursue a master’s degree in sports management. A three-time National Field Hockey Coaches Association (NFHCA) All-Mid East Region pick, Boileau’s senior year included 16 goals and 38 points.

Her record-setting career at Hofstra included three All-CAA selections. She ended her career ranked third in goals (40) and fourth in points (114) in program history and became the first Hofstra player to win the CAA Player of the Year award for her sport.

“It gives me a great deal of pride to say I was the first Hofstra player to win the award,” Boileau said, “although I have no doubt that there will be many more winners to come from Hofstra Field Hockey.”

As Boileau, Willis and Altomare move onto the next chapter, Galton and Llinares both enter their senior campaigns during the 2015-16 academic year.

Llinares is the lone Long Island native of the group. In 14 games the attackman recorded career highs of 33 goals and 57 points for the Pride, becoming the first Hofstra student-athlete to post 50 points or more in consecutive seasons since Tom Kessler did it in 2000 and 2001.

The 2014 United States Intercollegiate Lacrosse Association (USILA) All-American honorable mention tallied five hat tricks this season, including a career-best six goals against Manhattan. He also surpassed the 100-point plateau in his career in 2015, and now has 73 goals and 69 assists for 142 points, which is tied for 10th on the all-time Hofstra scoring list.

“It meant a lot to me to join the Players of the Year,” Llinares said. “We have a passionate athletic community that has done tremendous things in the history of our program, so I’m just happy to be part of it and contribute to it in any way I can.

“The success we’ve had across the different sports speaks wonders for the department,” he said. “We have a tremendous staff at Hofstra that makes each athlete’s experience a great one.”

Galton, a forward from Harrogate, England, scored a career-high 17 goals and 38 points, and won her second straight CAA Player of the Year award. She is just the fifth player in league history to win the award more than once. She is now aiming to be the first player in the 22-year history of the conference to win the award three times.

“I thank all the coaches who voted for me; it’s a huge honor and much appreciated,” Galton said. “It’s a confidence boost, and I work to earn the continued trust of my coaches who always support me and say ‘no one can stop you.’ My teammates always have my back, and I would be no one without them.

“It’s a blessing to share the honors with four other great student-athletes,” she said. “It shows just how much Hofstra Athletics has to offer and how strong we are becoming as a department. I just want to get out there and carry on that tradition and make Hofstra and everyone who supports us even more proud.”