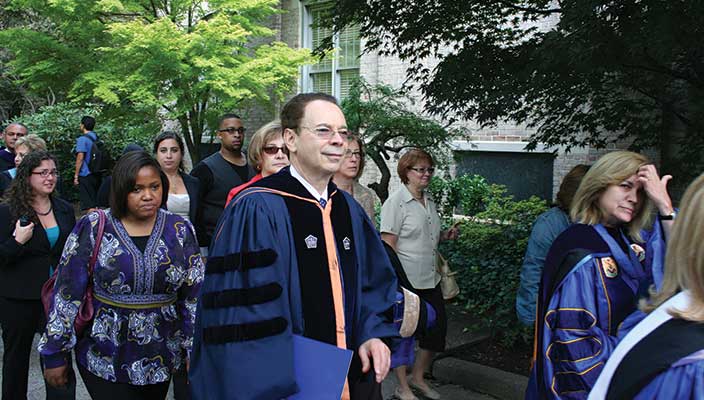 Dr. Berliner came to Hofstra in 1970 as an economics professor; over his 45 years at the University, he served in
a variety of key administrative roles, including dean of the Frank G. Zarb School of Business, dean of the School
of Education, associate provost, and associate dean for University Advisement. He holds the Lawrence Herbert Distinguished Professorship.

“When you’re provost for 25 years…you really have a chance to make an impact and help shape the faculty.” — Dr. Herman A. Berliner

In 2008 the Chemistry and Physics building was named Herman A. Berliner Hall in his honor, thanks to the support of Board of Trustees Chair Alan Bernon ’76, who is a former student of Dr. Berliner’s.

Dr. Berliner will return to the Frank G. Zarb School of Business as dean for the next year, while the University conducts a nationwide search for a new dean.

At commencement this spring, the University recognized Dr. Berliner for his dedication and service to Hofstra with the conferral of an honorary degree.

“When you’re provost for 25 years,” Dr. Berliner said, “you really have a chance to make an impact and help shape the faculty. For me, one of the enduring values of Hofstra University is excellence in teaching, and it’s been an honor to be in a position to monitor that for the past 25 years.”