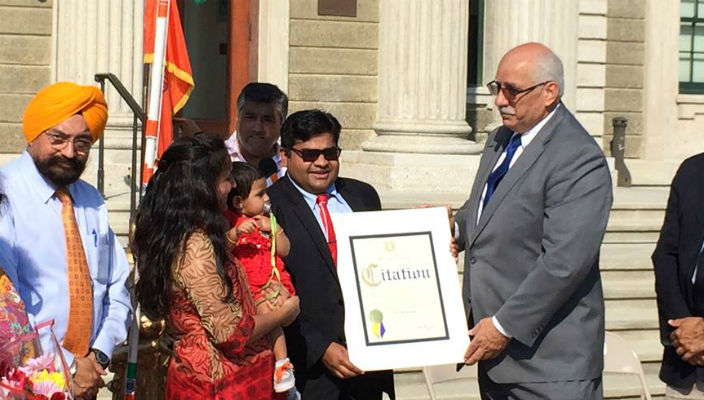 Akshat Jain, MD, a 2015 graduate of the Master of Public Health (MPH) program, was honored for his work in Nassau County and abroad during recent celebrations marking the 69th Independence Day of India.

Jain was one of five Indian-American professionals selected by Nassau County Executive Edward Mangano for his contributions as a childhood cancer specialist in the local community as well as his international public-health work fighting lead poisoning and the spread of disease.

On the steps of the Theodore Roosevelt Executive and Legislative Building, Jain was presented with a citation praising his “selfless commitment” and “spirited leadership” by County Legislator Dennis Dunne on Saturday, August 15.

“Frankly, as the youngest awardee for this honor, I felt out of place and wondered if I was really qualified to receive it,” said Jain, 32, who is finishing a fellowship in the Department of Pediatrics, Division of Hematology/Oncology, at Cohen Children’s Medical Center in New Hyde Park. “It humbled me and gave me more motivation to dedicate myself to care for these children with renewed rigor.”

MPH Program Director Corinne Kyriacou, PhD, a mentor to Jain during his graduate studies, was present at the ceremony.  “It was tremendously rewarding to witness Akshat bestowed with this prestigious recognition,” she said. “On behalf of Hofstra’s MPH program, we congratulate Akshat on his impressive clinical, research, policy and program development accomplishments and we thank him for his tireless commitment to improving the health of vulnerable communities.”

Earlier this month, he was invited to give a talk on global oncology at Harvard Medical School. Jain will serve as an assistant professor at the Hofstra North Shore-LIJ School of Medicine beginning in September.

Read more about why Dr. Akshat Jain began a public-health crusade in his native India to fight dengue fever, reduce lead poisoning in children and promote cancer care in the upcoming issue of  Hofstra Magazine, due out later this month.