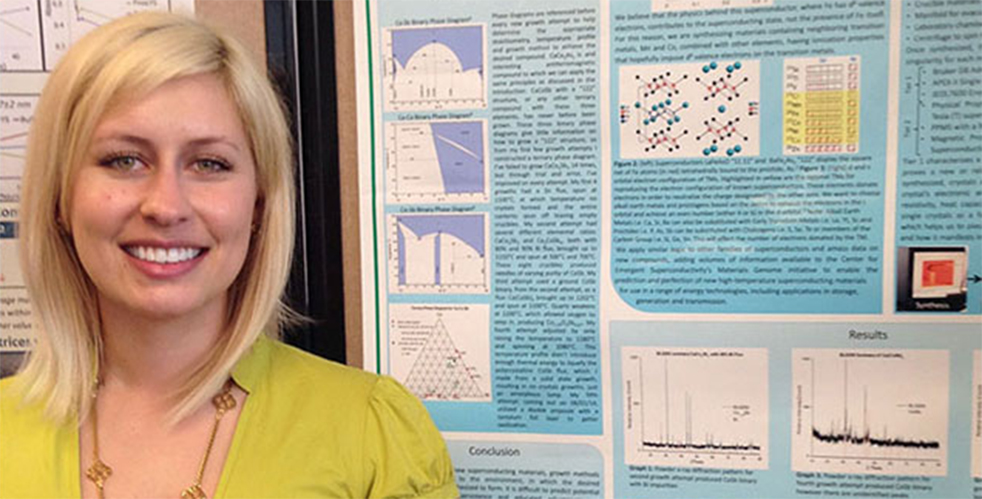 Claire Weaver, a senior physics and mathematics major from Farmingdale, NY, has been named a recipient of the 2015 Kirsten R. Lorentzen Award from the Society of Physics Students (SPS). She was selected from a pool of high-achieving physics students from institutions across the country.

The Kirsten R. Lorentzen Award is an Association of Women in Science (AWIS) Educational Foundation program that recognizes female college sophomores and juniors studying physics, including space physics and geophysics, or geoscience. The $2,000 award is given annually to an exceptionally well-rounded student who excels in her studies as well as outdoor activities, service, sports, music, or other non-academic pursuits or who has overcome significant obstacles. The award is administered by SPS and may be used for any aspect of education, including tuition, books, housing, or travel.

Claire put her college career on hold briefly to join the circus and become a flying trapeze instructor. When she was ready to resume her studies, she enrolled as a physics major at Hofstra, where she became the first female president of the Hofstra chapter of SPS. She calls the study of physics “a pure science … the Legos of the universe.”

She was the 2014-2015 recipient of the James A. Moore Endowed Memorial Award, which is also awarded to students excelling in their physics studies and service to the scientific community. Claire presented “Synthesizing New, High-Temperature Superconductors” at the February 2015 national meeting of the American Physical Society in San Antonio, Texas. She presented the results of a research project conducted during a 2014 summer internship with Dr. Meigan Aronsan at Brookhaven National Laboratories, involving the fabrication and property identification of metallic crystals in search for high-temperature superconductors.

More recently, Claire has been working on an independent study using group theory and symmetry to explore topological insulators. She conducted summer research in the field of nano-photonics and nano-plasmonics, tailoring light-matter interactions using metal-dielectric nanostructures, at the Advanced Science Research Center in Manhattan.

Claire plans to continue her studies in graduate school, where she will focus on Condensed Matter Physics. She says, “Not only has my enthusiastic and adventurous nature served me as I transitioned from the circus arts to the sciences, but so has my passion to inspire strength and ability in others. I have enjoyed furthering the development of Hofstra’s Physics community as president of SPS, and as I advance through my career I look forward to mentoring the next generation of brilliant minds.”