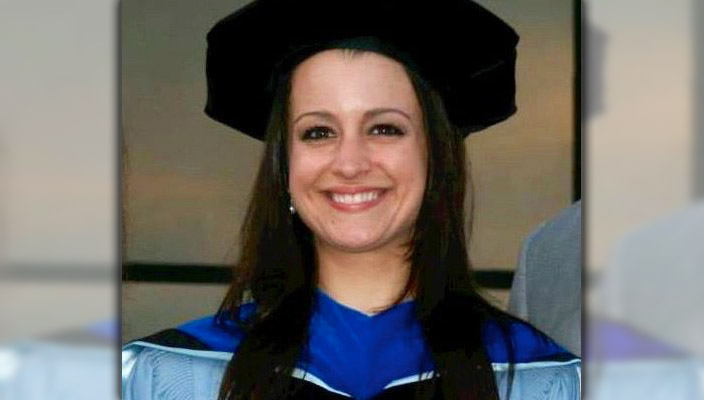 From the time she was in high school, biology alum Gina M. DeStefano ’09 knew she wanted to become a scientific researcher to study the genetic basis of human diseases. And now, as a freshly minted Columbia PhD, she’s doing just that in the Department of Genetics and Development at Columbia University Medical Center, where she recently helped discover that a mutation in a single gene can cause hypertrichosis, or excessive hair overgrowth. Not much research has been done on hair biology. Previous studies unveiled broad genetic problems in people who have hypertrichosis, but DeStefano’s study, which she worked on under Dr. Angela Christiano at Columbia University, seems to be the first to represent a single-gene form of hypertrichosis, sometimes referred to as “werewolf syndrome.”

An extremely rare syndrome, hypertrichosis is characterized by lots of hair growing where it shouldn’t, such as terminal (thick, dark, dense) hairs growing on the forearm of a child, where vellum (fine, light, short) hairs should be. DeStefano discovered that a mutation in ABCA5, a cholesterol transporter gene, affects hair growth, and thereby hypothesized along with her team that interfering with cholesterol transport, which is key to many cellular functions, may be important.

While DeStefano and her team’s discovery doesn’t provide a way to treat hair diseases, it helps researchers better understand the hair cycle, which takes them one step closer to formulating treatment.

That study was published in scientific research journal PLOS Genetics and was subsequently featured in a BioTechniques news article.

During her time at Hofstra, DeStefano studied genetics under Dr. Laura G. Vallier. “[Dr. Vallier] took me under her wing and taught me how to do genetics — from the very basics, to performing genetic screens and analyzing data,” DeStefano said. “She inspired me to continuously think about science, pursue interesting lines of questioning, and her support and encouragement has had a lasting impact on how I mentor students.”

As an undergrad, she worked as a teacher’s assistant for introductory and upper-level genetics courses, and even had the chance to take a graduate level genetics class in my senior year. “Collectively, these experiences informed and inspired my decision to pursue my PhD in genetics, with an ultimate goal to become a professor someday,” she said.