A film by a group of 2015 graduates from the Lawrence Herbert School of Communication was named best drama at the Campus MovieFest summit, the world’s largest student film festival.

Five alumni, working under the team name Wrong Island Entertainment, wrote and produced Concurrence, a film about how six people face the final moments of their lives before an apocalyptic catastrophe. 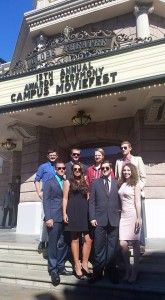 The team members were:

The Hofstra alums competed against teams from more than 60 other campuses in the 15th annual film summit, which was held in Los Angeles from July 9-12.   A dozen honors in categories such as best picture, best drama, best comedy, soundtrack and production design were awarded by a jury of film and TV professionals.