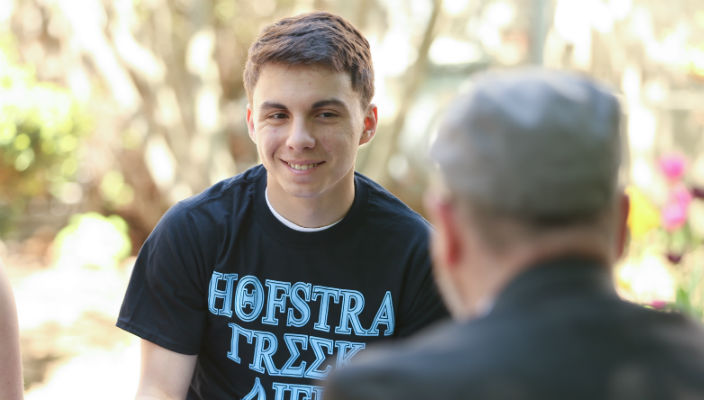 Kevin Patalano’17, a finance major, has been an awarded a competitive scholarship to study the German language in Munich this summer.

Given by the German Academic Exchange Service, a joint organization of universities and other institutions of higher learning in Germany, the scholarship allows Patalano to study advanced German for four weeks, from July 6 to 31.   The course covers oral and written expression as well as listening and reading comprehension, and also includes trips to the German Museum, BMW, Olympic Park, Dachau Concentration Camp Memorial Site, among other places.

“I’m really looking forward to my time in Germany, particularly to see my family friends in Hannover who were the first ones to introduce me to the German language,” said Patalano. “I also want to visit the Eisbach (ice brook) in the Englischer Garten (English Garden) in Munich.  There is a man-made standing wave there, which is home to many surfers. Growing up on Long Island and being a surfer myself, I would love to get a chance to surf there.”    He will also participate in three weekend trips to the 19th –century Neuschwanstein Castle as well as the cities of Augsburg and Salzburg.

Patalano, who has a minor in German and has been studying the language for nine years, had to write an autobiographical essay and a letter explaining his career goals, both in German, as part of his application for the scholarship.

“Kevin showed great initiative and diligence in pursuing this scholarship, which reflects his hard work learning the language as well as his deep interest in and enthusiasm for German culture,” said Neil H. Donahue, Assistant Provost for Undergraduate Research and Fellowships and Patalano’s advanced German professor.

Next summer, Patalano hopes to be back in Germany for an internship.  “A lot of German car manufacturers, such as BMW and Audi, are doing research into alternative fuel sources and I would love to be part of that,” he says.  Active in Hofstra’s campus chapter of Habitat for Humanity, which builds affordable homes for low-income families, he adds, “I want to work toward something that will make a difference in the world. I don’t know exactly what that is yet, but I know I want to be part of something bigger than myself and something that is going to make a change.”