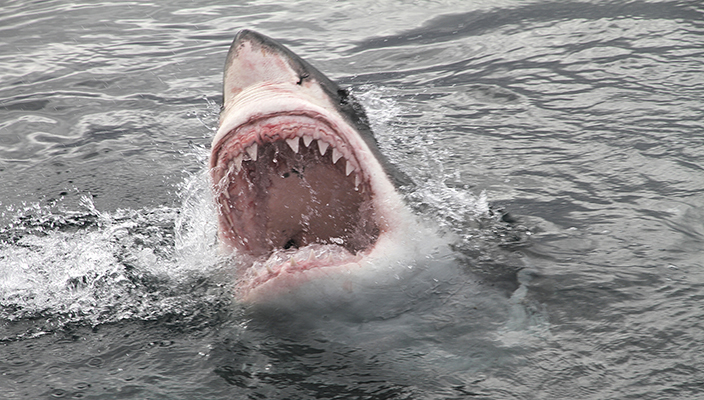 Dr. Chris Sanford’s life was put on a singular trajectory after he went to see Jaws in his native England at the impressionable age of 15. The professor of marine biology, who is currently serving as a program director at the National Science Foundation in Washington, DC, credits the film with inspiring his career as a professor and researcher. Now on the eve of the film’s 40th anniversary, Dr. Sanford talks about the impact of Jaws.

What about Jaws resonated with you?

I have to be honest about this – it was Jaws that led me to where I am now. I became very interested in these magnificent animals. I saw myself as “Matt Hooper” [the oceanographer played by Richard Dreyfuss]. Originally I was interested in why sharks attack, but then it transpired that my interest in sharks became focused on fish in general and fish behaviors.

How do you explain the continuing impact of the film?

One of the really great things about the movie is that you don’t even see the animal until halfway through the film, and so there is a terrific buildup of suspense. The second half of the movie is a battle between humans and this giant sea monster.

People are innately afraid of sharks, and I think what captivates audiences is this fear of the unknown. If you look back on storytelling from a historical perspective, there’s always been a perception of large dangerous sea monsters that attack humans or ships – whether it’s a shark, a whale or a giant squid. What drives this is that people are out of their element in the water. It’s not our natural environment, and we can’t see far down into it. If you’re attacked, you don’t see it coming.

There have been some shark attacks in the news recently, so is the fear justified?

The majority of shark attacks happen in less than five feet of water and less than 100 feet from the beach. Most shark attacks are very quick and unanticipated. However, the chances of being attacked by a shark are almost zero. You have a better chance of being killed from bee stings, trampled by an elephant or struck by lightning. But those things aren’t on our radar. You have to remember that in the water, sharks are in their natural habitat. We’re the visitors. We’re encroaching on their environment.

Sharks don’t eat people. That’s a misconception perpetuated by the movie. No one knows for sure what their motivation is when they attack people, but in some cases it’s mistaken identity. They could mistake someone on a surfboard or a swimmer in a wet suit for a seal, which is their natural prey. They typically bite and leave once they realize what they’ve bitten is not a marine animal. 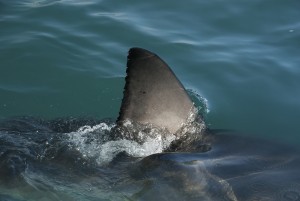 Though the chances are slim, what should one do if faced with a shark?

I don’t think there’s any consensus over what to do if a shark attacks. Certainly, if you have the opportunity – often they will bite and then just swim away – you should aim for its most vulnerable areas: the gills and the eyes.

Aside from people not being their primary target, what else did Jaws get wrong about sharks?

Well, the movements of the shark in the film were very stiff. In reality, sharks are very graceful animals. But given the technology that was available to [Steven] Spielberg, I think he did the best he could with the special effects of the time.

There is also the scene where the shark comes up onto the boat and attacks “Quint” [the shark hunter played by Robert Shaw]. It’s almost as if the shark has a vendetta! That wouldn’t happen. And the way the shark kills Quint – shark jaws are extremely powerful. A real great white shark would most likely have just bitten him in half. 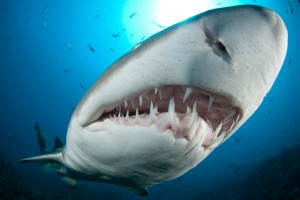 Jaws is considered one of the greatest monster movies of our time. We know what it did for Spielberg’s career, but how did it affect sharks?

Sharks get a bad rap. They are beautiful, efficient animals that are very well adapted to their environment. They are extremely important as top predators of the ocean. One of the results of the film was that people would go out on ships to hunt and kill great white sharks. Their numbers plummeted. Now they’re protected and the population is growing, but the lifecycle of a shark is very long. It’s going to take years for the numbers to fully recover.

Once you take a top predator or an apex predator out of the ocean, it causes a destabilization of the ecosystem. One of the biggest contributors to the current decline of shark populations is called “finning,” a very barbaric practice used primarily to make shark-fin soup in different parts of the world. Fishermen haul in sharks, cut off their fins, and throw them back into the water alive. The sharks can’t swim without their fins, so they die. Some reports say we’re losing as many as 100 million sharks a year to finning. The practice has been banned in many countries, but the laws are hard to enforce, and in international waters there is little that can be done. It’s decimating shark populations.

Being as the movie is an important part of your history, do you hear the Jaws theme in your head when you go into the water?

Back in 2003 I went on the Biology Department’s trip to the Galápagos Islands. I was snorkeling and there were a lot of sharks nearby. It’s important to again remember that it’s not in a shark’s nature to attack humans. I did feel a little uneasy, but being so close to them, I couldn’t help but admire how beautiful they are. At the same time I realized how far out of my element I was, and – if  for some reason they did decide to attack me – there’s just no getting away! 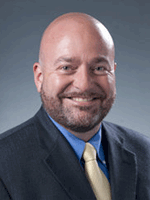 The conventional wisdom on Jaws is that it marked a major turning point in the American film industry, ushering in a phase of “Blockbuster”-filmmaking that essentially ended the more artistic and politically charged period of the early 1970s known as the “Hollywood Renaissance” (which had in turn been influenced by the international art cinema of the 1960s).  Critics of this “Blockbuster” trend have suggested that Spielberg, together with his friend George Lucas, were largely responsible for re-“infantilizing” the American film audience, taking us back to a pre-1960 mode of filmic storytelling.

The truth of the matter is a bit more complicated. While it is true that Jaws (and Lucas’s Star Wars) demonstrated that a single film could generate tremendous revenues and did indeed encourage a surge of blockbuster productions, we might think of such trends as pendulum swings. Later on, in the mid-late 1980s, there was a new rise in American independent films, with fresh young filmmakers like Steven Soderbergh, Spike Lee, the Coen Brothers, and others offering a return to a more auteurist approach.  Popular culture is multifaceted, and trends in film history tend to be more large-scale than the importance of a single film.

Having said all that, Jaws is in my opinion a tremendous film that has as much impact on me as a viewer today as it ever had. The tension and horror that Spielberg creates in the nighttime swimming scene is just masterful. 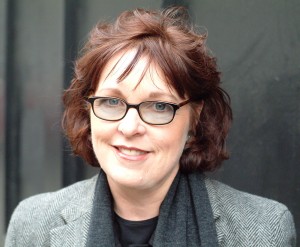 I already have my tickets for the showing in the theater this Sunday. I want my 13-year-old nephew to experience its full impact on the big screen like I did in the summer of ’75 (when I just graduated high school).  I remember going the opening day of the film after a long day at the beach, where I stupidly got a nasty sunburn. Within minutes of the film’s start I forgot all about my sunburn. It is one of my all-time favorites – nothing can top the monologue delivered by Robert Shaw as Quint about the fate of the Indianapolis. It is a perfectly made film.

Like Bruce the shark, the pop culture impact of Jaws was huge – and for that reason I have mixed feelings, since it was the start of the ridiculous obsession with box office returns. I am pretty sure it is the reason for Shark Week every August on the Discovery channel. And I think very few films historically have had the ability to actually affect people’s behaviors like Jaws. I live on [Long Island’s] South Shore and no one I know ever goes into the ocean without hearing the first few notes of the soundtrack or thinking twice about going swimming at night. 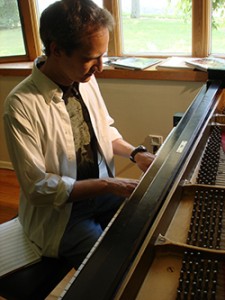 Jaws was the highest grossing film of all time until Star Wars, and it was the beginning of the era of the Hollywood film scores.  It was the film that launched John Williams into the starlight. It was a film in which the music played the role of the shark and really brought the importance of the music score to the attention of the audience.