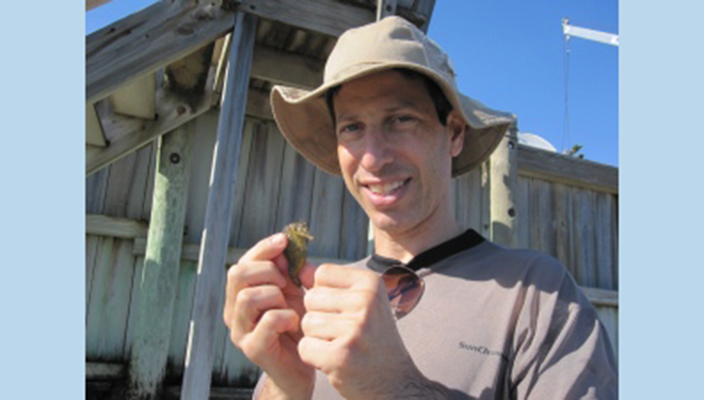 When a frog calls, biologist Jeremy Feinberg ’00 listens. Feinberg is credited with recently identifying a new species of leopard frog in Staten Island – quite a feat considering it is only the second discovery of its kind in the continental US over the past 30 years and the first in New York since 1854. Feinberg, who has a master’s from Hofstra in biology, also holds the distinction of helping the University to establish its thriving research center at the Jamaica Bay wildlife refuge in Queens.

Feinberg’s fascination with wildlife started during his childhood on Long Island. “Early on, I remember thinking it would be cool to discover a new species.” He completed his undergraduate studies at SUNY Albany before coming to Hofstra for a master’s. His adviser at Hofstra, now chair of the Biology Department, Dr. Russell Burke, was also new to the University and was steering Feinberg toward research involving turtle habitats in New Jersey.

“Russ proposed working on a species he had experience with prior to Hofstra – spotted turtles – and there was a remote field site in northwest New Jersey,” explains Feinberg, who was living in Bayside, Queens, at the time. “Initially something about the distance and the fact that we didn’t have reliable funding at the time were making me nervous. I had friends who knew I was going to be studying turtles, and they were telling me, ‘You should go to Jamaica Bay. There are turtles that nest all over the paths there.’

“At some point we got confirmation of the large population of diamondback terrapins. They are really easy to work with because they come out of the water and nest in the open. For a lot of reasons, including the reliability of finding turtles and the short travel distance, the research in Jamaica Bay just made sense. And because we focused our research in Queens and not a remote, mountainous area of New Jersey, I’m considered an urban researcher, which is a good niche to have.”

Feinberg’s current leopard frog research has been reported by international world news outlets, including National Geographic, The New Yorker, Discovery and the BBC. Other than the novelty of the discovery, why should the average person care if there is one more type of frog in the world?

“There’s so much out there from animals that could benefit us directly,” explains Feinberg, who is currently finishing his PhD in ecology and evolution at Rutgers University. “Just for our own human benefit it’s important. Then in terms of the ecosystem it is important. Yeah, maybe you can lose a species here or there. But who wants to gamble with how many blocks you can pull out before the whole house collapses?”

When Feinberg reflects on his graduate studies at Hofstra, he expresses gratitude for his collaboration with Dr. Burke. “I’m glad to still be in contact with him and be a colleague – I feel privileged to know him from that early part of his career. I think about all the time he gave me – that was really valuable and it’s not a guarantee when you are a grad student. I didn’t realize it then because I didn’t have enough experience. What I experienced working with Russ also went beyond the classroom. He really pushed me to go to conferences and to network, and he pushed me to publish at a time when I didn’t want to even consider pursuing a PhD.”

“Now my direction is much more focused on academia. I would still consider working at a federal agency or nonprofit but only ones where I could continue active ecological research.”