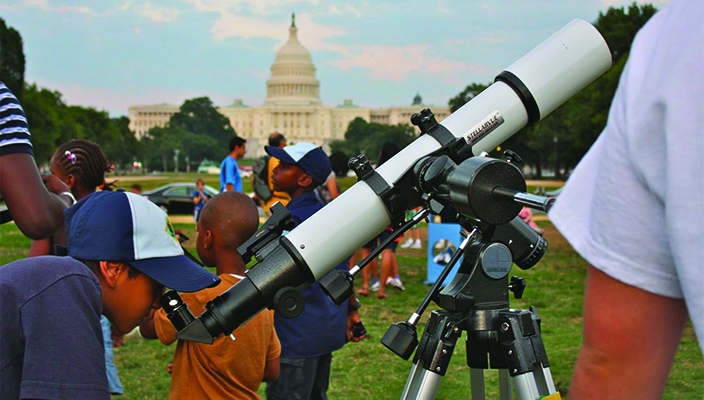 In Washington, DC, on Friday, June 19, from 6-11 p.m. visitors to the nation’s capital will be able to look to the skies with telescopes providing views of the of Sun, Moon, Saturn, Jupiter, ands Mars as part of the Sixth Annual Astronomy Festival on the National Mall (Washington Monument NE; 15th Street NW and Constitution Ave).  The event, organized by Hofstra University’s Department of Physics and Astronomy, features telescopic viewing, videos, a planetarium show, a chance to mingle with astronomers, and an exhibition, LIGHT: Beyond the Bulb, presented by UNESCO as part of the International Year of Light. LIGHT features 20 images that showcase the incredible variety of light-based science being researched today across the electromagnetic spectrum, scientific disciplines, and technological platforms.

This free public stargazing and associated events have been coordinated by Dr. Donald Lubowich, Coordinator of Astronomy Outreach at Hofstra University. Dr. Lubowich and local amateur astronomers will set up 20 telescopes on the Mall. Starting at 6 p.m., visitors may view sunspots with the help of specially filtered telescopes. After dusk and until 11 p.m. the telescopes will provide close-up views of the Moon, Saturn with its beautiful rings, Jupiter and its moons, Mars, colorful double stars, and star clusters that sparkle like diamonds on black velvet.

Performance artists dressed in period costumes will play Caroline Herschel, the first female astronomer credited with discovering many comets, and Danish astronomer Tycho Brahe and his colleague, Johannes Kepler, best known for the discovery of the laws of planetary motion.

“Bringing Hofstra’s program to the National Mall and partnering with astronomical organizations gives us a very special opportunity to encourage children to pursue their interest in science or math and to promote public understanding of science,” said Dr. Lubowich. “Gazing at the rings of Saturn or the Moon’s craters and mountains captures the imagination, no matter how old you are.”

Close public parking is available for a fee at the Ronald Reagan International Trade Center Building, entrance on 14th Street just 1/4 block North of Constitution Avenue, from 5 p.m. until 1 a.m.