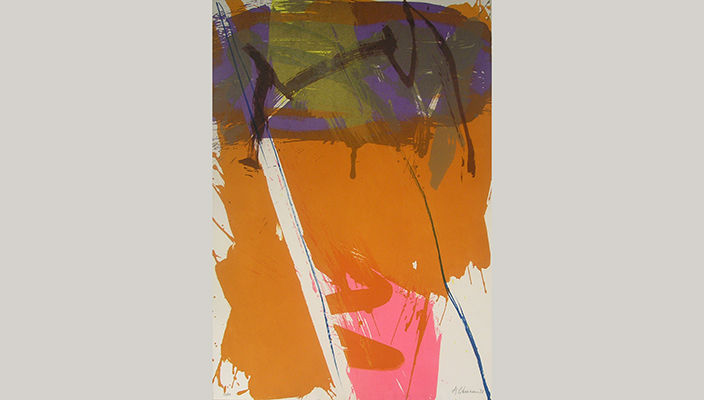 Works by Long Island-based artists Roy Lichtenstein, Robert Motherwell, Larry Rivers and Robert Rauschenberg and other major artists, including Jasper Johns, Alexander Libermanm Claes Oldenbug, Frank Stella, and Andy Warhol are among those featured in the Hofstra University Museum original exhibition Portfolios I: 1970.  Works include a variety of printmaking and collaborative methods including silk screen, lithography, photomechanical reproduction, collage, embossing, engraving, and hand-painting. Portfolios I: 1970 will be on view at the Emily Lowe Gallery through August 14, 2015.

Curated by HUM Associate Director of Exhibitions and Collections Karen Albert, Portfolios I: The 1970s  is the first in a planned series of exhibitions highlighting distinctive artist portfolios of prints and photographs in the Museum’s permanent collections. Each portfolio represents selected images that the artist intends to be viewed as a group, with clear connections between the selected works.

An illustrated full-color checklist accompanies the exhibit, as well as gallery interpretive materials, including an interactive touch screen kiosk with supplemental material examining the artistic methods and processes pioneered by the featured artists. There is also a free Art Caper activity available for children and families.

Executive Director of the Hofstra University Museum Beth E. Levinthal said, “The rich resources of the Hofstra University Museum permanent collections include 50 unique artist print portfolios.  This exhibition highlights works that represent the ‘artistic revolution’ taking place during the decade of the 1970s. We thank the New York State Council on the Arts and New York Community Bank Foundation for their support in bringing this exhibition to fruition.”

For more information about this exhibit and associated public programs please call (516) 463-5672.