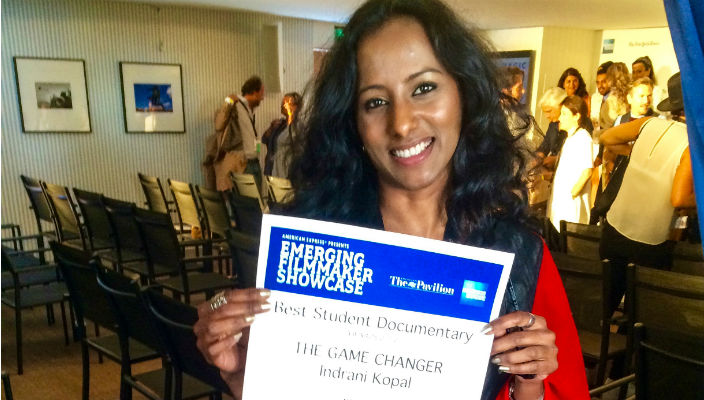 Already widely-acclaimed, her film won the honor at Cannes’ American Pavilion Emerging Filmmaker Showcase, which highlights films from students and young filmmakers.  Kopal’s work was among just 22 films chosen to compete from among 500 submissions.  The film was also selected to screen at another Cannes session, the Short Film Corner.

“I am just in shock; it’s quite overwhelming,” Kopal told the Malaysia-based DailySeni.com news site shortly after the announcement of her win.  She was a multimedia journalist in her home country of Malaysia before coming to New York as a Fulbright Scholar to pursue graduate studies in documentary studies and production at Hofstra’s Lawrence Herbert School of Communication.   She will complete her degree program later this summer after her return from Cannes.

The Game Changer, which Kopal began as part of her graduate coursework in Prof. Phil Katzman’s class, is a look at a choreographer who is using arts intervention to change the lives of long-term prisoners.

“Indrani’s achievement in Cannes is just phenomenal,” said Prof. Aashish Kumar, who is currently overseeing her thesis work, a larger story of the ex-convicts’ efforts to reintegrate into the wider world .  “It’s a testament to her ability to get the film’s subjects to trust her so she could tell their story and advance the message that even though they were ex-convicts they were able to reinvent themselves as artists.”

The documentary short has already been screened at 13 other festivals, winning several awards – most recently, it was named best short documentary at the 9th annual Harlem International Film Festival in New York City.

Established in 1946, the Cannes Festival recognizes the best in filmmaking from around the world and draws more than 35,000 film professionals and 4,000 journalists representing 1,500 media outlets in over 75 countries.  The 2015 festival runs May 13 to 24.

I/O Psychology: What It Is and How It Can Benefit Business, May 20
Dean Evan Cornog on Presidential Hopefuls & the Iraq War