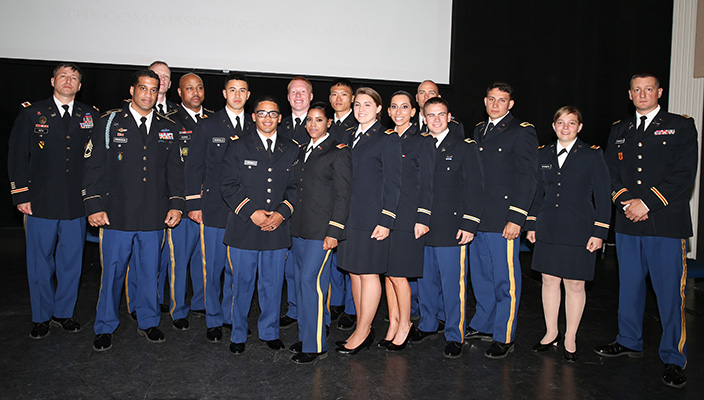 Ten seniors, including six from Hofstra, were commissioned as officers in the grade of Second Lieutenant (2LT) in the United States Army when Hofstra University’s Military Science Department held its Spring Commissioning Ceremony Friday, May 15, 2015, at The Helene Fortunoff Theater in Monroe Lecture Center.  Hofstra is a host university for the Senior Army ROTC Program on Long Island and for some additional area institutions.

The ROTC Cadets participated in moving traditions, including the Silver Dollar Salute symbolizing an officer’s first salute and having their 2LT rank fastened on their uniform by spouses, parents and other family members. The ceremony was moderated by Lieutenant Colonel (LTC) Daniel Cederman, chair and professor of Military Science, who talked about the physical, academic and emotional journey each cadet undergoes to get to the point of the commissioning.

He also discussed the internal questions they must ask about the type of leader they hope to be and how they plan to take care of the soldiers who fall under their command. He said their ROTC training has prepared them to lead by example, and they are graduating as “creative thinkers, critical thinkers, and adaptive soldiers with strong moral values.”

The guest speaker for this ceremony was Hofstra alumnus Colonel Adam Roth, Class of 1987, Regional Engineer for the 99th Regional Support Command at Joint Base McGuire-Dix-Lakehurst, where he is responsible for facilities and infrastructure for over 300 facilities across 13 states in the Northeast. He graduated from Hofstra with a BS in Industrial Engineering and immediately entered active duty at Fort Benning, GA.  He has served overseas in Germany and Iraq. “The future of our nation is in front of you,” he told the audience, referring to the cadets.

This year’s commissionees include:

2LT Jose Rivera (DMS), Hofstra University, BA in Spanish and Latin American and Caribbean Studies – Field Artillery. DMS or Distinguished Military Student is an honor for a cadet who possesses outstanding qualities of leadership as well as a standing in the upper third of their ROTC class and in the upper half of their academic class.