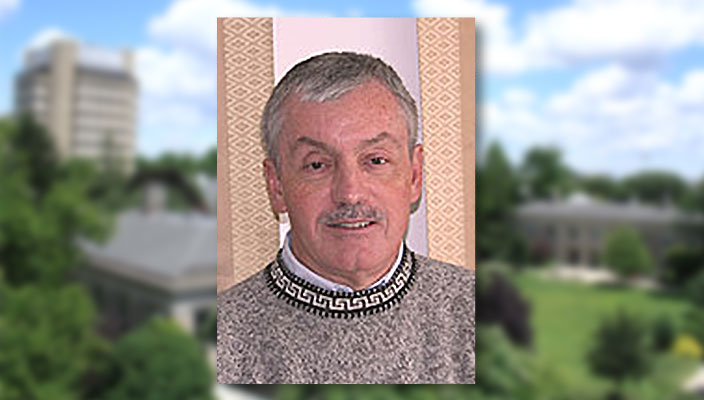 James E. Wiley, PhD, professor of global studies and geography, has been named the 2015 Mentor of the Year, the fourth recipient of an annual award that honors outstanding faculty supervision of advanced undergraduate research.  He is the second professor from the Department of Global Studies and Geography to receive this honor, following Dr. Kari Jensen, who won the recognition last year.

“I am deeply honored to be the recipient of this award,” said Dr. Wiley.  “To me, it is the most meaningful award I could have won as it involves the activity that I have found the most rewarding of all during my 24 years at Hofstra.”

The Mentor of the Year award is given to a full-time faculty member who has guided students toward developing original ideas for research in any discipline – from the laboratory or clinic to the library, field, or stage —  which marks the transition of the student into graduate studies or professional life.

Dr. Wiley, who will be retiring at the end of this semester, teaches courses on world regional geography, population and migration geography, and geographic methodology.  In January, shortly after the normalization of U.S.-Cuban relations, he helped lead a group of 15 students on Hofstra’s first study-abroad program in Cuba, where they gained a firsthand perspective of the Cuban people and took in historic sites such as the University of Havana and Revolution Square. He plans to continue as co-director of next year’s Hofstra-in-Cuba trip as well.

In addition to teaching, Dr. Wiley also supervises students’ honors theses, senior research projects, and internships.  “In our department, my colleagues and I place a great deal of emphasis on our individual work in helping students maximize their potential,” he said.  “A big part of what I’ve viewed as my role in the mentoring process has been to try to convince students of just how capable they really are.  I do this by working with them to expand their ideas of what is possible for them to accomplish.  In a department like ours, with its global orientation, that often involves helping students prepare themselves to do foreign research, which is a phenomenal accomplishment for undergraduate students.  We’ve had students do field work in the Galapagos, the Dominican Republic, Haiti, Sri Lanka, and Indonesia, among other places, with projects in India and Cambodia on tap this summer.  We are very proud of this.”

Students and faculty who nominated Dr. Wiley all mentioned his devotion to his students and his ability to inspire:

“Professor Wiley is one of the most dedicated, insightful members of the Hofstra family. He helped ignite my love of geography and has been a dependable mentor ever since.”

“I owe him my gratitude for encouraging me to go as far as the Dominican Republic to simultaneously investigate my research question firsthand, practice my Spanish in a foreign context, and familiarize myself with my father’s family in that country, to the delight of my parents and myself.”

“I am excited to nominate my colleague Dr. James Wiley for the Mentor of the Year award…I have had the pleasure to serve on several of the honors committees of his students over the years, and I have been impressed by the high level of academic conversation between him and his students, and his always encouraging and listening style of mentorship.”

“Dr. Wiley encouraged me to go out and do research in my home country of Haiti… and to accompany him to the study abroad trip in Cuba , which really was life-changing. Dr. Wiley has been immensely integral to my success here at Hofstra.”

Dr. Wiley joined Hofstra in 1991, and has since added several new courses to the geography curriculum, including specific regional courses on Latin America, South America, the Caribbean, Mexico and Central America, Africa, and Australia and the Pacific.  He was also Hofstra’s first director of Latin American and Caribbean Studies.    A world traveler, he has visited more than 120 countries and uses his photographs and notes to enrich the classroom experience for students.

Dr. Wiley will be presented with the Mentor of the Year award at the Latin Honors Convocation on Sunday, May 17, 2015.  In addition to Dr. Jensen, previous winners of the award were media studies professor Mary Ann Allison and biology professor Justin DiAngelo.