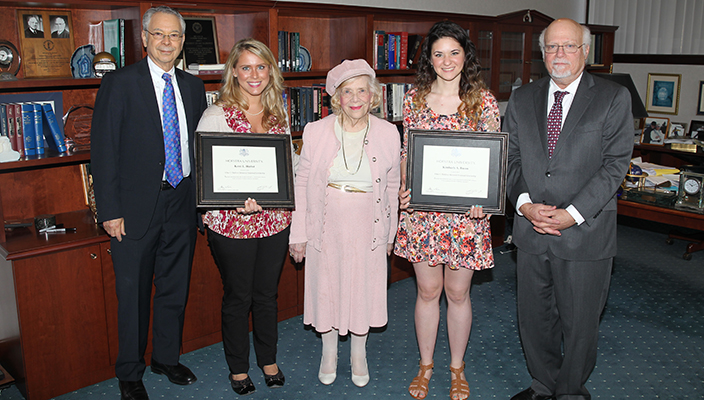 Hofstra 2014 graduates – Kimberly Bacon of Levittown, NY, and Kerri Herbst of Seaford, NY, have been named recipients of Hofstra’s Albert I. DaSilva Memorial Endowed Scholarship for each earning a 4.0 G.P.A. The scholarship may be used toward graduate school or other academic pursuits.

The late Mr. Albert DaSilva was a noted entertainment lawyer. His wife, Zenia DaSilva, was a professor of Romance Languages and Literature at Hofstra. She has the distinction of being Hofstra’s longest-serving faculty member. Though now retired, she taught at Hofstra for 54 years.

On April 29, 2015, Dr. DaSilva, Hofstra President Stuart Rabinowitz, and Provost and Senior Vice President for Academic Affairs Herman A. Berliner, met with Bacon and Herbst. Dr. DaSilva talked to them about her and her husband’s shared commitment to education, the humanities and to helping young people achieve their professional and academic goals. “He was a champion of the liberal arts and believed that young people ought to experience a textured education that instills an appreciation of the arts and sciences,” Dr. DaSilva said.

“I would like you to know how incredibly proud we are of your achievements,” President Rabinowitz added. “Perfection is hard to beat.”

Kimberly Bacon majored in pre-health, with a minor in religion. She is currently working toward a second bachelor’s degree in dietetics and nutrition at Queens College.

Kerri Herbst graduated from Hofstra with a BS in Health Science. She is working in the human resources department at the Holly Paterson Extended Care Facility in Uniondale, NY, and is pursuing an MPA in Health Administration at LIU Post.