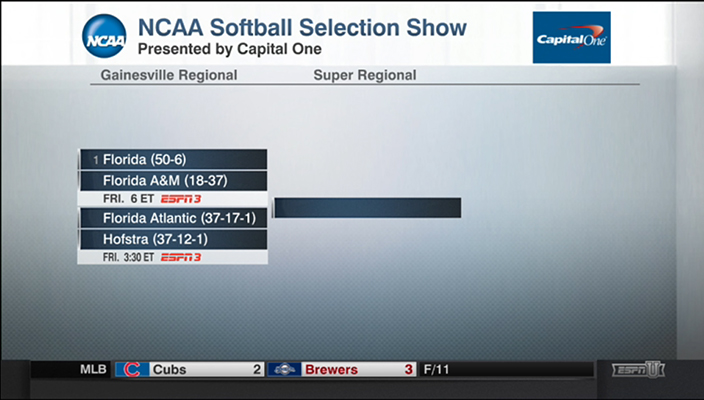 Top overall seed and defending national champion Florida is hosting the four-team double-elimination regional. The Pride and Owls will square off in a game shown on ESPN 3 and with free live audio available via Pride Productions. Terrestrial radio is also available in the local area on WRHU (88.7 FM) featuring a pregame show that starts at 3 p.m. Florida will play Florida A&M at 6 p.m. in a game that will also be shown on ESPN 3.

Hofstra (37-12-1) faced FAU (37-17-1) twice this season and is 3-9-1 in the all-time series. The Pride lost to the Owls, 3-2, in eight innings in the first meeting on March 6 and the two teams tied, 5-5, after 11 innings on March 8. That game did not continue because of Hofstra’s flight schedule on the final day of the tournament, resulting in the only stalemate of the year for either team. Hofstra last defeated FAU, 7-2, on the Owls’ home field in 2014. This season, FAU advanced to the Conference USA title game, where the Owls fell, 3-1, to Western Kentucky.

Long balls have been the key to Hofstra’s offense. The team already has walloped 56 home runs in just 50 games, tying the 2013 squad for the most single-season home runs in school history. Junior outfielder Caryn Bailey continues to be the offensive leader and her 16 home runs are twice as much as the next-closest teammate in freshman Megan Patierno.

Bailey, the CAA home run leader, needs just one more blast to tie Danielle Stewart’s program single-season record of 17 set in 2003. With four home runs in the Colonial Athletic Association Championship, she extended her career total to 32. The Elizabethtown, Pennsylvania native was just the third Hofstra player to reach the 30-home run club and trails Tessa Ziemba by seven for the second-most all-time.

Bailey hit .667 and set a CAA Tournament record with those four home runs and 18 total bases while slugging 2.000 and reaching base safely in 11-of-14 plate appearances for a .786 on-base-percentage. She is hitting .396 with 52 RBIs, which is just one away from tying Crystal Boyd’s 1992 mark for the second-highest single season total in school history.

Fellow junior outfielder Chloe Fitzgerald, the defending CAA batting champion, is hitting .378 with a .406 on-base percentage and 38 runs scored. As the leadoff hitter, Fitzgerald has provided RBI opportunity for the second-hitting Bailey. Junior third baseman Kim Smith and sophomore second baseman Lacey Clark have also come up as the 3-4 hitters. Each is hitting better than .310 and the duo has driven in at least 26 runs apiece.

In the circle, Hofstra is relying on the senior duo of Morgan Lashley and Taylor Pirone. The Pride’s pitching helped the team beat No. 18 James Madison twice in two days to win the team’s third CAA championship in four years and earn the automatic berth in the NCAA Tournament. Pirone was named the tournament’s Most Outstanding Performer after going 3-0 and has set a career-high for wins in her 18-10 start. The New Rochelle, New York product has a 1.87 ERA and leads Division I in the fewest walks-allowed-per-seven innings by issuing just 11 free passes against 117 strikeouts in 183 2/3 innings. Lashley had won 19 consecutive decisions before falling to JMU in the first game on Friday. But Lashley (19-2, 1.95 ERA) threw 2 1/3 perfect innings of relief to save the 2-1 win for Pirone in the championship clincher over the Dukes.

Florida was ranked second in the latest NFCA national poll and is the defending national champion. The Gators have already compiled 50 wins (50-6), helping the team earn the top overall seed in the NCAA Tournament. The Gators boast a top-to-bottom talented squad that features two players who made the USA Softball Collegiate Player of the Year Top-10 Watch List in pitcher/infielder Lauren Haeger and infielder Kesley Stewart.

Florida A&M won its second consecutive MEAC title to earn the league’s automatic berth. Hofstra is 5-1 in the all-time series.

Ticket prices for all-session passes are $25 for adults and $10 for children 12 & under, seniors (55+) and non-UF college students with proof of college ID. Single season tickets are $10 for adults and $5 for groups meeting the aforementioned criteria. For more information, please call the Florida ticket office at 352-375-4683.