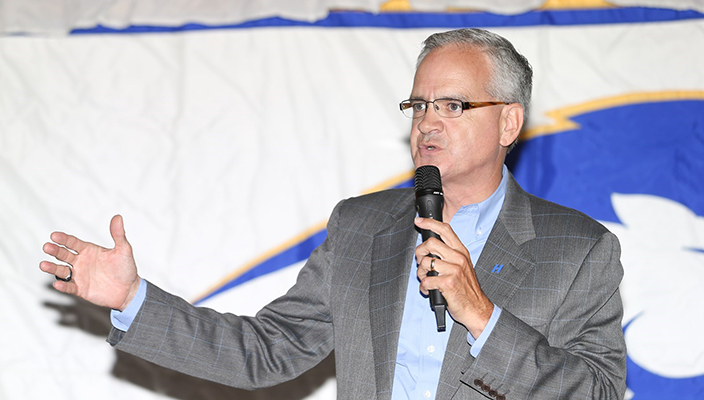 Hofstra University Vice President and Director of Athletics Jeffrey A. Hathaway was named an Under Armour Athletic Director of the Year, it was announced this morning by the National Association of Collegiate Directors of Athletics.

“I appreciate the opportunity to work with Hofstra President Stuart Rabinowitz and the entire University community,” commented Hathaway. “Certainly I’m humbled by this recognition and know that the credit for our successes truly belong to our outstanding student-athletes, coaches and staff.”

NACDA Under Armour Athletics Directors of the Year (PDF)

Hathaway, along with the other recipients, will receive his award during the James J. Corbett Awards Luncheon on Wednesday, June 17, at NACDA’s 50th Annual Convention in Orlando, Florida.

This marks the third time that Hathaway has received this honor as he previously earned the award in 2006-07 and 2009-10. Only three athletic directors have done this at the Division I level. In addition he is one of just two athletic directors to earn the recognition in two different subdivisions of Division I.

During his tenure leading the Hofstra Department of Athletics, Hathaway has seen eight squads make NCAA Tournament appearances and 12 student-athletes combine to earn either Academic All-America accolades or be named CAA Scholar-Athletes.

Since Hathaway took the reins, seven new head coaches have joined the staff, including Head Men’s Basketball Coach Joe Mihalich. In two years men’s basketball has risen from a seven-win team to a 20-win season in 2014-15.

The Hofstra Athletics Pride Club has increased fundraising during each year of his tenure. Hathaway has also overseen areas of capital improvement with the completion of the Hofstra Basketball Practice Facility this past July as well as the replacement of artificial turf surfaces at James M. Shuart Stadium, the Hofstra Soccer Stadium and University Field (baseball).

He earned both his bachelor’s and master’s degrees from the University of Maryland.