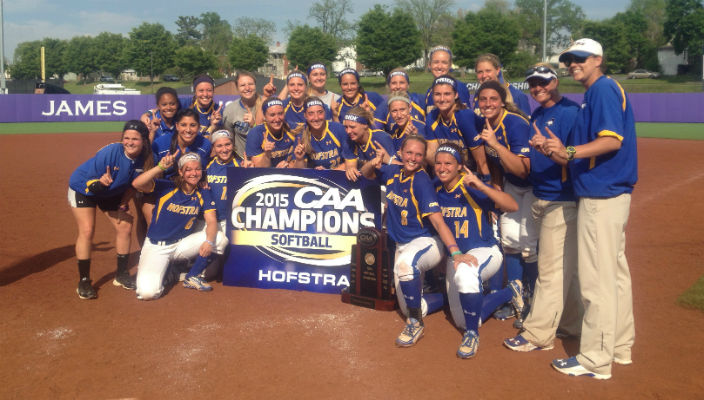 Senior pitcher Morgan Lashley entered the day with just two career saves and none this season. The right-hander then produced the best relief outing of her career, throwing 2 1/3 innings of flawless relief to backstop Hofstra’s Colonial Athletic Association championship-clinching 2-1 win over No. 18 James Madison Friday afternoon at Veterans Memorial Park.

Lashley stranded two runners in the fifth, struck out the side in the sixth and two seventh to save the win forTaylor Pirone (18-10). Lashley struck out five of the seven batters faced in front of 667 fans for her third career save.

Sophomore second baseman Lacey Clark drove in both runs on two-out RBI singles as Hofstra won its 11th CAA championship and program history and earned an automatic berth in the NCAA Tournament. Second-seeded Hofstra (37-12-1) fell to the Dukes, 4-3, in the first game of the double-elimination tournament’s final day, but bested the top seed in the rematch and now await its destination in the program’s 16th-ever NCAA Tournament  berth. The selection show is Sunday at 10 p.m. on ESPNU.

Hofstra knocked off JMU, which entered the week ranked 18th in the latest NFCA national poll, twice in two days. Pirone earned the Tournament’s Most Outstanding Performer and made the All-Tournament team along with Lashley and junior outfielders Caryn Bailey and Chloe Fitzgerald.

Hofstra won the 11th CAA title in program history and third in the last four years. Lashley threw 26 of her 30 total pitches for strikes for the program’s 19th-ever conference tournament championship dating to 1992 in the East Coast Conference.

Pirone and Lashley bested JMU’s Megan Good in a great pitching mathcup. The CAA Rookie and Pitcher of the Year was 27-0 entering the tournament but fell to 28-2 as the Pride won twice in two days. Good held the Pride to just five hit in a complete-game, though Clark had two as the teams squared off in just the fifth-ever championship elimination game in CAA history and the first since 2011 when the Pride lost to Georgia State twice on the last day at home. Lashley and Pirone did not walk a batter the entire game in the clincher.

Clark drove in two runs on a pair of two-out singles and Fitzgerald scored both runs. Hofstra struck for runs in both the first and third innings, starting in the opening frame when Clark went the other way for a RBI single to the right side that glanced off second baseman’sMorgan Tolle’s outstretched glove to score Fitzgerald from second.

Staked to the lead, Pirone pitched to contact and recorded five of her first six outs on the ground. She lowered her ERA to 1.87.

Fitzgerald, who totaled three hits on the day in both games, reached on a fielder’s choice and advanced on Bailey’s walk in the third inning. Clark then extended Hofstra’s lead by poking a two-out single over shortstop Niki Prince to score Fitzgerald for the second time.

Sophomore shortstop Michaela Transue hit a three-run home run in the first game to account for Hofstra’s entire offensive production and made a terrific diving snag on Jailyn Ford’s hard hit grounder in the hole. Transue glove the ball and fired to Kim Smith at third to get pinch-runner Mimi Morris for the first out at third. Pirone retired the next two batters to send the contest to the fifth with Hofstra leading, 2-0.

CAA Player of the Year Erica Field’s hard-hit single to left put JMU on the scoreboard in the fifth, scoring pinch-runner Caitlin Viaforia on the two-out hit. Lashley entered in relief and stranded two runners by striking out Good on a 2-2 swing-and-miss to put the Pride six outs away from a title. Lashley then set down the side in order in both the sixth and seventh to close out the team’s fourth CAA title since 2010.

Pirone compiled 11 total innings between the first and second games and allowed just two earned runs without walking a batter. Her 18 wins set a career high, besting the 17 she totaled in 2014 in her first year with the Pride after transferring from Fordham.

In the first game of the day, Hofstra brought the winning run to the plate in the bottom of the seventh before Ford finished off a complete-game effort by posting a strikeout to close Hofstra’s 4-3 loss and set up the winner-take-all elimination contest.

Transue’s three-run home run in the sixth ignited Hofstra’s comeback bid. The Pride, which did not register a base hit off JMU’s Jailyn Ford until  Fitzgerald’s leadoff single, mounted a rally when Bailey walked for the third time to put the first two runners on.

Smith’s liner tailed to shallow center, but Taylor Newton got a good read and made a diving catch. That proved a clutch play when, after a fly out, Transue went to the opposite field for her sixth home run to move Hofstra within 4-3.

In the seventh, Ford (16-4), struck out the first two batters before Fitzgerald beat out an infield hit for her second base knock of the day. That brought up Bailey, who had four  home runs in the last two games and was walked in her first three plate appearances. Ford then got Bailey to swing and miss to strike out the side; finishing with 12 strikeouts as the left-hander threw 116 pitches in seven innings.

Pirone threw 6 2/3 innings of relief and allowed just two runs (one earned) to give Hofstra chance to come back. Pirone held a potent JMU lineup to just six hits and struck out one without allowing a walk. The Pride saw its season-high 11-game winning streak snapped.

JMU, which batted as the visiting team in its own ballpark in the first game, took big cuts early as Prince homered to left on the game’s second pitch and Good added a solo shot to left-center off starter Lashley one batter later. A hit batter ended Lashley’s day after a third of an inning as Pirone came on in relief.

Field and Good singled and scored to give Ford a cushion in the third. The pitcher and cleanup hitter contributed at the plate as well, pulling a RBI double down the leftfield line.
Lashley (19-2) lost to end her streak of winning 19 consecutive decisions. It was her first defeat since Opening Day on Feb. 15.

Freshman Brittany Allocca nearly erased a 4-0 lead with one swing in the fourth, lining up a Ford fastball that she hit to the warning track in centerfield with the bases loaded. Bailey and Transue walked and Smith was hit by a pitch to loaded the bases without a hit. Allocca’s grand slam bid just fell short as Newton settled under it to end the threat.

Two strong defensive plays ended JMU’s threat in the sixth. Freshman Brielle Pietrafesa made a diving catch in shallow right with two runners on and Bailey collected Prince’s base hit and threw out Hannah Hayes at the plate. The Pride then struck in the bottom of the inning on Transue’s homer, which was just the 13th Ford allowed in almost 130 innings.

Bailey already set multiple CAA Tournament records in just the first two games. She doubled the previous home run mark with four homers in the first two games. No one hit as much as three in any one tournament, Bailey’s 18 total bases also broke the tournament record of 14, which was held by Georgia State’s Jessie Harmon in 2006 and Hofstra’s Lisa Wambold in 2004. Both of those players needed five games to reach that mark.

Hofstra matched up against JMU in the championship round for the third time in program history. The Pride bested the Dukes twice in 2008 and Olivia Galati threw a complete-game in 2013 to win titles on Hofstra’s campus.

The Pride wore throwback uniforms for the first  game, donning the top-white; lower-half blue (with blue sleeves) digs with the diagonal “Hofstra” across the chest. The uniforms were Hofstra’s primary during the run of 11 consecutive conference tournament championships from 1998-08.