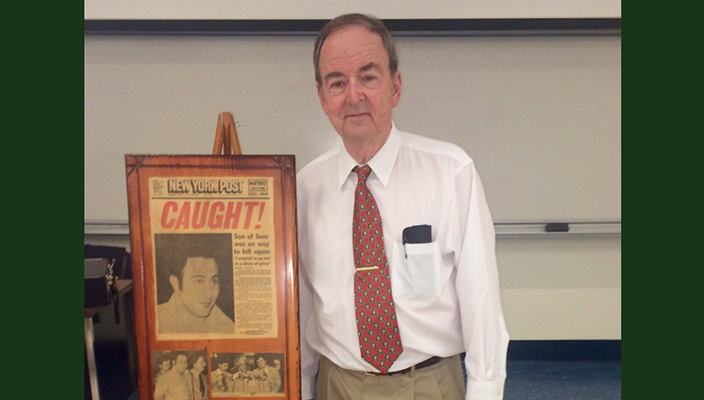 August 10, 1977, marked the day the infamous “Son of Sam” serial killer was arrested. One of the arresting officers, William Gardella, a now retired 30-year veteran in the New York Police Department, spoke about the investigation at Hofstra at an April 29th event sponsored by the Sociology Department’s Criminology program.

“It was a lot of pressure. We knew he was going to kill again,” Gardella recalled of the investigation of 13 shootings committed by David Berkowitz, known as the “Son of Sam.” It was a time of frenzy; New Yorkers were afraid to leave their houses because they worried that they could become the next victim in his killing spree.

Gardella explained that initially the first few murders seemed unconnected. This is because they took place in different boroughs of New York City, and ballistic evidence was only recovered from one of the shootings – referred to by Gardella as bullets “of value.” It was not until the fourth and fifth murders – which took place in the same Queens neighborhood – that police began to consider a single shooter. 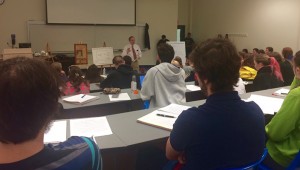 Gardella recounted that by the sixth murder, police caught a break, hearing from the killer for the first time. A letter written with very distinct handwriting was left at the scene, and it threatened that the killings would continue. Tensions in the city heightened as the case began receiving more media attention, both nationally and internationally.

Despite the media attention and the increasing number of detectives assigned to the case, leads came to a standstill. The murders continued.

The final killing took place in a park early one morning. Gardella said that police deducted that the shooter may have been issued one or more tickets while staking out a victim.

Eventually they came across a ticket issued to Berkowitz. After further investigation, police found a large duffle bag in his car with what looked like a gun and a letter with the same distinctive handwriting as the one they had received months earlier. Now, confident they had their man, the next step was to arrest him. At roughly 10 p.m. August 10, 1977, they finally arrested the man the world had been so anxious to catch. Gardella recalled the moment of the arrest. Smirking, Berkowitz mocked, “Well, you got me. What took you so long?”