Arthur Solari, music director of Hofstra’s Dance Program, has been nominated for a Drama Desk Award for “Outstanding Music in a Play,” recognizing his original score for the play Tamburlaine the Great, presented by Theater for a New Audience at the Polonsky Shakespeare Center in Brooklyn, November 1, 2014-January 4, 2015. This is Solari’s first Drama Desk nomination. The 60th annual Drama Desk Awards ceremony takes place on May 31 at Town Hall in Manhattan.

Christopher Marlowe’s Tamburlaine the Great was written in 1587, and this recent production marked the first time the play had been given a major New York production in 58 years. The play recounts the brutal rise to power and the mysterious end of the bloody 14th-century Mongol conqueror Timur, or Tamburlaine.

“Marlowe’s work was new to me,” says Solari. “The director – Sir Michael Boyd, former artistic director of the Royal Shakespeare Company – made it clear right away that he was open to experiment. He suggested that I think of the score as a percussion concerto underneath the verse. There is about two hours’ worth of music in this three-hour play, so music is the dominant voice throughout the production.”

Ben Brantley of The New York Times was just one of the major New York City theater critics to praise the play and Solari’s contribution: “Tamburlaine is a force of nature…Packed with pomp, pageantry, stylized violence and coruscating theatrical wit…The primal rhythms of warfare are echoed in Arthur Solari’s propulsive, percussive music, which evokes a world in which storms always threaten, and thunder rumbles forever.” 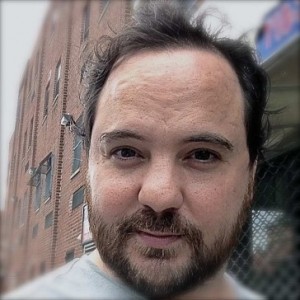 Solari composes music for productions in both the Dance and Drama Programs at Hofstra. Now that the academic year at Hofstra is coming to a close, he is quickly moving on to his next project, the Shakespeare in the Park summer production of The Tempest, for which he’ll be serving as musical director and performer. The play, directed by Michael Greif (Rent and Next to Normal) and starring Sam Waterston, will be performed at the Delacorte Theater in Central Park, May 27-July 6.

And more excitement awaits Solari at the end of summer. He is expecting his first child – a baby boy – with his wife, Jennifer Goggans, a former member of the Merce Cunningham Dance Company who now stages MCDC works throughout the US and abroad.