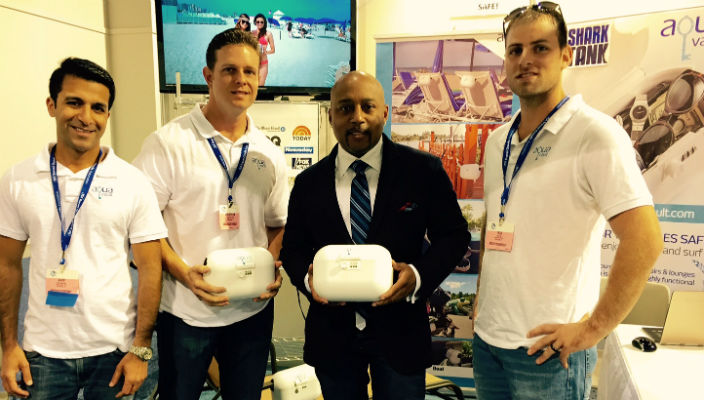 What started as a friendship in 2001 during their freshman year at Hofstra has blossomed into an innovative business venture for Frank G. Zarb School of Business ’05 alums Avin Samtani, Rob Peck and Jonathan Kinas,  who recently pitched their product – AquaVault – on ABC’s “Shark Tank,” and hooked investor Daymond John, who agreed to invest $75,000 for a 25 percent stake in their company.

AquaVault is a portable personal safe that attaches to beach furniture, bicycles, strollers and basically any outdoor apparatus to safely stow your valuables while you have fun in the sun. Samtani, Peck and Kinas unlocked the idea after they got burned at a high-end resort in South Beach, where they were staying for a wedding they attended in 2012.

“We hid our stuff under our towels and in our shoes,” Samtani said. “We were only a few feet away, and although we looked over at our chairs multiple times, when we got back to our lounges, our stuff was gone. Worst vacation nightmare comes true!”

The friends and former classmates decided to make lemonade out of lemons. “There should be something you could put your valuables into so you could lock up and swim, but there wasn’t — so we invented the AquaVault,” Samtani said. “Designs were being drawn on napkins that same day.”

Those sketches soon morphed into software renderings. Peck majored in international business, but he has an engineering background. “Rob’s family has been in the construction business for decades, which helped when determining the right materials and design software we should use,” Samtani said. “He was able to navigate through the CAD design software and teach himself. We went through half a dozen prototypes until we were happy with the end result.”

The partners tested the waters for their final prototype at trade shows before diving into “Shark Tank.” “Our product was a huge hit [at the Inpex inventors trade show in Pittsburgh], and it only further confirmed the need to pursue our dream,” Samtani said.

Buoyed by the bond they formed during their years at Hofstra, Samtani, Peck and Kinas took a leap of faith and left their full-time jobs last year to devote all their attention to AquaVault. Samtani, who was a marketing major, left his residential and commercial lending position at a Manhattan bank; Peck owned a contracting company in Upstate New York; and Kinas, who majored in finance, was a financial advisor at Merrill Lynch. They targeted South Florida as a potential hotbed for AquaVault and all moved down there.

“Hofstra is a great school and we all have different backgrounds, which helped,” Samtani said. “Going to school together really strengthened that bond of friendship and trust that has kept us together.”

The AquaVault execs were among 45,000 applicants vying for a spot on Season Six of “Shark Tank.” They advanced and were able to pitch their product to the panel of “sharks,” or investors. Their segment aired on March 13. “It was a nerve-wracking experience because we didn’t know what to expect,” Samtani said. “We had one shot to go up there in front of a panel of extremely successful businesspeople and convince them to invest in our company. We are very satisfied with the outcome.”

In addition to its success on “Shark Tank,” AquaVault has also been heralded by Forbes, the Today Show, Fox 5, The Miami Herald, and Newsday, among many other media outlets.

Going forward, new partner Daymond John  will be hands-on at AquaVault. The company already has dozens of hotel and corporate partners and aims to be “a staple at every hotel, cruise ship and theme park in the world,” Samtani said. “When you go down to the pool and grab your chair, we want AquaVault to be there with it. People these days want their smart phones with them and there should be a place to lock up your valuables if you want to take a dip in the pool or walk around the resort. Vacation is all about being worry free and our AquaVault helps provide that added peace of mind.”

And while Samtani, Peck and Kinas eye the future, they are grateful for their past. “Starting a business is not easy and there are definitely ups and downs, but no matter what, we all find a way to keep each other’s heads up and stay focused for what’s ahead,” Samtani said. “We can also look back and see how much we’ve grown since back in 2001 when we met, and it’s a great feeling.”