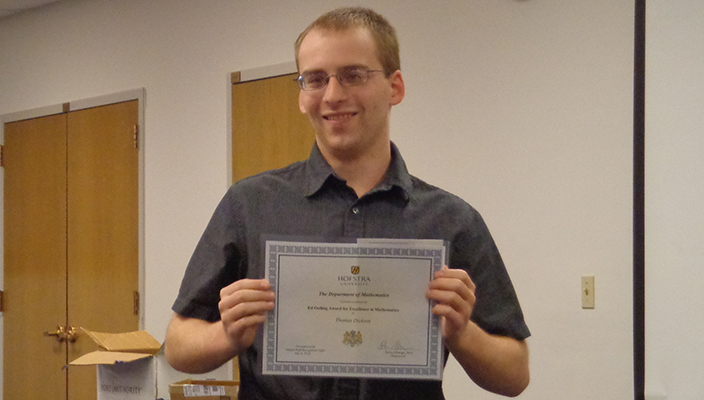 Senior Thomas Dickson has emerged as Hofstra’s top scorer in the 75th Annual Putnam Exam, considered the most prestigious and challenging mathematics test in the United States and Canada. How difficult is the Putnam? It’s not unusual for the average score to be zero or 1 for the six-hour, 12-problem test, taken by college undergraduates who excel in their studies and are specifically gifted in math. Dickson, who has been accepted into the PhD program for Applied Mathematics at Lehigh University, received three points out of 120.

According to Hofstra Math Professor Raymond Greenwell, “This year 4,320 students from 557 colleges and universities took part in the competition. Forty-three percent got a score of 0 or 1. The top score was 96 out of 120 possible.”

“We’re told to expect to get a zero,” explains Dickson, a mathematics major and computer science minor. “My goal was to get at least one point and was happy to get three.” The exam, run by the Mathematical Association of America, was administered at Hofstra to 14 students on December 6.

Dickson, who resides in Merrick, NY, has always had an affinity for math. “I love that there is nothing subjective about it. Either you get the right answer or the wrong answer. There’s nothing in between.” Upon entering Hofstra, one of his first professors was the Department Chair, Dr. Sylvia Silberger, who he says has been a true mentor. “I’ve taken Calc 1, 2 and Advanced Calculus with her. She is also adviser on my senior thesis on a new way of decomposing partial fractions.”

When asked about his post-Hofstra and post-PhD plans, Dickson says, “I wouldn’t mind being a statistician. I find that field fascinating.”

Dickson currently serves as president of Hofstra’s chapter of Pi Mu Epsilon, the national math honor society. He is a dean’s list student, and in spring 2014 he was named the recipient of the Math Department’s Ed Ostling Award for Excellence in Mathematics.

The highest Putnam Exam scorer in Hofstra’s history is Michael Cole ’89, who scored 59 points in 1988 for a national ranking of 74.5 out of 2096 participants. Dr. Cole is now an associate professor of mathematics at Hofstra.