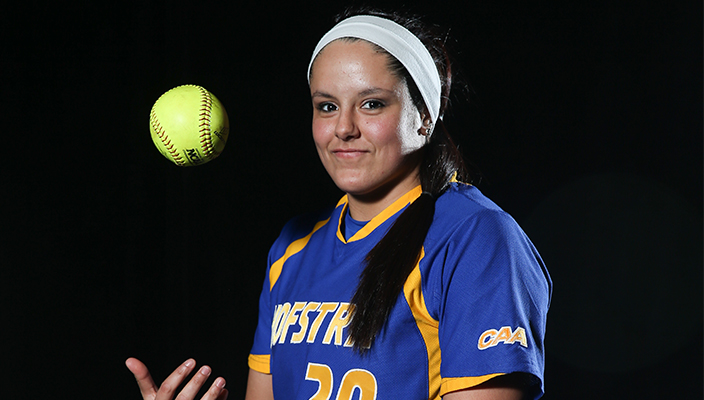 The cliché is spouted across different sports from the amateur to the professional levels. An athlete claims he or she simply wants to go out there and perform whatever role is necessary to help the team achieve victory. But then the time comes when the player is actually asked to perform different roles and adjust to unfamiliar circumstances, and the bravado can fade like the familiar playing time for which the individual was accustomed.

Hofstra senior pitcher Taylor Pirone hasn’t fallen into that category. The right-hander has been hard to define in one role since transferring to the Pride from Fordham before the 2014 season. As a key starter and reliever – sometimes in the same day – Pirone helped Hofstra qualify for the NCAA Tournament last season and has Hofstra’s RPI at 25 entering the week of April 20.

Pirone’s career-best week that ended April 14 epitomized her value to the team. The New Rochelle, New York product factored in every victory of Hofstra’s 5-0 week, going 3-0 with two saves. Just one run was scored on her 23 1/3 innings, where she struck out 20 and walked just one.

She has exceled in facing almost every situation on the pitcher’s spectrum. Entering with the potential tying and winning runs on base in the last inning to close out a win? No problem. Pirone retired the only batter she faced for a high-stress save for Morgan Lashley over Patriot League-contender Lehigh on the road. Throw a complete-game shutout less than two hours later on the same field against the same top-flight opponent? Pirone was up to that challenge as well, tossing a six-hitter in nearly frigid conditions against the Mountain Hawks.

Against Drexel, Pirone threw seven innings of shutout relief before Hofstra mounted an 11-inning win. In three road Colonial Athletic Association wins over Drexel, she won twice and saved another victory for Lashley. That versatility, an ace and a closer rolled into one, has helped Hofstra race to a 30-11-1 start and to second place in the CAA.

“I like starting but when Morgan is pitching great and I can come in and close it out, everyone feels good and it’s a team effort,” Pirone said. “I’ll do whatever this team needs. It’s a bit of a different mental challenge starting versus relieving, but you just need to be ready.”

The combination of Lashley and Pirone guided Hofstra to the NCAA Norman Regional in 2014 when the two transfers accounted for every Pride victory. The duo has replicated that feat this season, with Lashley winning 18 consecutive decisions since her only loss in February and Pirone racking up double-digit wins for the second consecutive campaign.

Both Pirone and Lashley were honored before their final game at Bill Edwards Stadium on Sunday. Besides the Senior Day ceremonies, the two shared a bond even before throwing a pitch in a Hofstra uniform. Both came from well-respected Division I programs for their first two collegiate seasons before arriving at Hofstra. Lashley was an NFCA all-region selection at Army and left as the program’s all-time leader in wins. Pirone stayed close to home and played mostly as a reserve at Fordham.

After starting just 12 games in her first two years with the Rams, Hofstra Head Coach Larissa Anderson(who was the pitching coach in 2014) worked with the hurler in the offseason and the result was a career-best 17-8 season with a 1.75 ERA. After never winning more than four games in a season, Pirone picked up Hofstra’s only win in the NCAA regional and earned NFCA and All-CAA first team honors.

But before working with Anderson and then-head coach Edwards, Pirone said the idea of pitching at Hofstra when she was a prep standout at the Ursuline School in New Rochelle was always something she thought was a pipe dream.

“I never even wrote to Hofstra when I was in high school,” Pirone said. “I didn’t think I was good enough to play here. The Hofstra players were what you saw on tv: those SEC or PAC-12 caliber players. Just the way they train and are conditioned, it was like those teams you saw competing on the national stage growing up. To be a part of it now is an amazing experience. There’s times I walk around campus and think “I can’t believe I go here.'”

In high school, before Pirone seriously considered a Hofstra career, she was a three-time all-state selection and a four-time all-league, section and county honoree playing under her father John Pirone, who is a former baseball captain at LIU Post. The elder Pirone said the Hofstra environment has brought out the best in his daughter.

“The biggest improvement I’ve seen from Taylor since she transferred has been her renewed confidence,” he said. “Taylor is the kind of player who thrives in an environment of structure.
“The Hofstra coaches teach the nuances of the game and develop their players to be able to compete amongst the highest level of D1 softball. The life lessons they have taught her about hard work, loyalty, and gratitude will be beneficial, long after her softball career is over. It has been the perfect fit for her.”

Pirone’s pinpoint control was ranked the best statistically in Division I, as she led the nation in fewest walks allowed per seven innings by issuing just nine walks against 97 strikeouts in 141 2/3 innings entering the weekend series versus Delaware. Her finesse, contrasted to Lashley’s better than a strikeout-per-inning velocity (152 punchouts in 137 1/3 innings) gives the Pride coaching staff different looks in the circle.

“I know we can go deep in the count and Taylor competes on every pitch,” Anderson said. “Taylor drops her changeup and gets a lot of ground balls. The two pitchers complement each other so well and it’s good to know that if we get in the situation where hitters are getting on time with our pitching staff, I can make a change because it takes usually one time through the lineup for the opposition to get on time.”

Fellow senior Erin Trippi has caught every Pirone pitch the last two seasons and praised her mettle in handing multiple roles with the same focus.

“Taylor is the epitome of a gamer,” Trippi said. “She’s a good leader; the work and effort she puts in on and off the field from the minute she became part of this program has made her so valuable. She always puts the program’s integrity above all else and that alone shows tremendous maturity and leadership.”

Those leadership qualities were evident to John Pirone during Taylor’s senior season at Ursuline. John, who is still the head softball coach at the school, sensed that his senior-laden team was not completely focused for the league championship game with the prom approaching. He turned to his daughter with the team trailing to help galvanize the group.
“I pulled her aside and said I needed her to be a leader and find something extra inside of her to get us back in it,” Pirone said. “She did. She shut them down the rest of the game, hit two home runs and helped us to victory. In that moment, I knew she could be a really good Division I player.”

After posting Hofstra’s only NCAA Tournament win in 2014 (a victory over Bryant), Pirone and Hofstra will be looking to capture a CAA championship against a talented field headlined by nationally ranked James Madison, who will host the three-day conference tournament from May 6-8 in Harrisonburg, Virginia. The Pride dropped both regular season meetings at home to the Dukes, who, like Hofstra, has made the last two NCAA Tournaments.

“We’re going in with the expectation of winning it all,” Pirone said. “We’ll be trying to win it all on someone’s home field. James Madison is a great team and there’s no doubt about it. But I think losing both games to them lit a fire under us, and we’ll be ready for the challenge.”