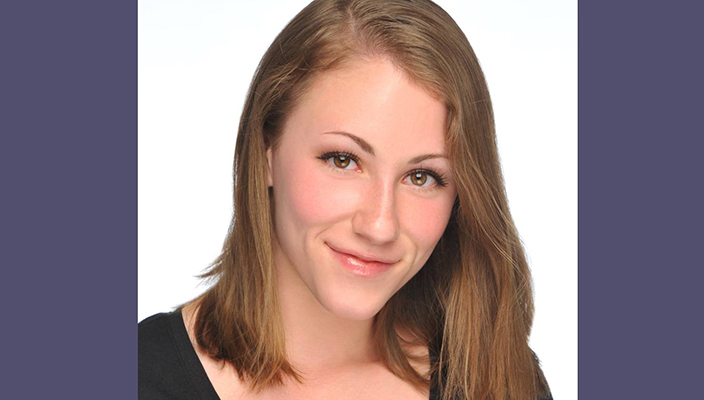 For the first time, a Hofstra dance major will present a full hour of her original choreography for the end-of-year Student Rep, a showcase of theatrical work and dance presented by the Department of Drama and Dance, April 30-May 5.

Alexis Robbins, a senior from Wakefield, RI, with a dual major in dance and exercise science, is the first dance student to apply for her own show within the Student Rep. “Typically MOVOM, featuring selected students and choreography from the Dance Program, puts on a short performance,” Alexis explains. Her concert, titled kamrDANCE, features a 14-member cast in a seamless production of 7 dances, all choreographed by Alexis during her four years at Hofstra.

“Two of the pieces are brand new. The other five have been performed previously, but I’ve revamped them,” she explains. “Each piece could easily stand on its own, but they flow without break from one to the other.” Alexis says that there is a drastic mood change from dance to dance. When asked how she portrays mood – particularly in tap, which is her specialty – Alexis answers, “I think any style of dance can convey any emotion. Music does a lot to influence the mood. But there is also how you move your body. There is what my feet are doing, but I also use my upper body and face to set the mood.” 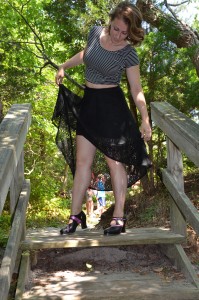 kamrDANCE features tap, modern and jazz styles, and the dancers range in class year from freshman to senior. “All the students are amazing and have appeared in my works before.” Two of the students, senior Briana Giordano and junior Ginny Mottla, are each appearing in three dances. Alexis is grateful to her cast for devoting so much time and energy to the rehearsals and development of kamrDANCE. “We’ve been rehearsing for three hours every Saturday since the start of the semester, and then there have been many other times in between.”

As the director and producer of the performance, Alexis has also had to lean on students in theater production to make sure kamrDANCE is a success. “My stage manager, Geena Forristall, a senior BFA Theater Production major, is amazing. I requested her and am so lucky to have her on my team. As the stage manager, Geena has to know the show as well as I do. It helps that she’s also a dancer, so we speak the same language.

“My lighting designer is Max Cerci. He has sat through rehearsals and is always making notes and offering lots of great ideas. He comes up with concepts and questions that I hadn’t even thought to address.”

kamrDANCE is not the first time Alexis has distinguished herself in the Dance Program. In her sophomore and junior years she was selected by dance faculty to represent Hofstra in the American College Dance Festival Association (ACDFA) Northeast Regional Conference. Both times she was asked to perform in the end-of-conference gala, a great honor for which only 9 or 10 students out of approximately 50 are selected. For the 2013 conference (which incidentally took place at Hofstra) she choreographed and performed a contemporary tap solo titled “Slow Dancing in a Burning Room,” which she performed to the John Mayer song of the same name. Hers was the only tap piece in the festival. 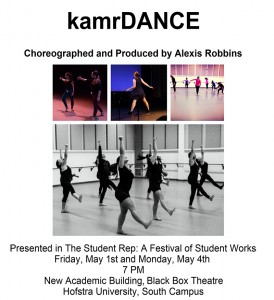 At the 2014 conference at SUNY Brockport, she choreographed and performed in a modern dance and tap duet titled “A Separate Connection.” That year Alexis was also selected as First Alternate to perform at the ACDFA National Conference at the Kennedy Center in Washington DC.

Juggling her dance classes and rehearsals with her second major in exercise science has been particularly challenging this semester but also very rewarding. She is finishing an internship at Winthrop Physical Therapy, where she has enjoyed working with patients and seeing their progress.

As for post-graduation, Alexis knows for certain she wants to move to New York City but is still on the fence whether her professional goals will center on dance or physical therapy. Right now, she’s planning to compromise. “I’m hoping I can get my choreography out there and audition, while also working as an aide. Eventually there will be graduate school.”

Alexis’ production of kamrDANCE will be performed twice during the Student Rep – Friday, May 1, and Monday, May 4, at 7 p.m. at the Black Box Theater. Admission is free.