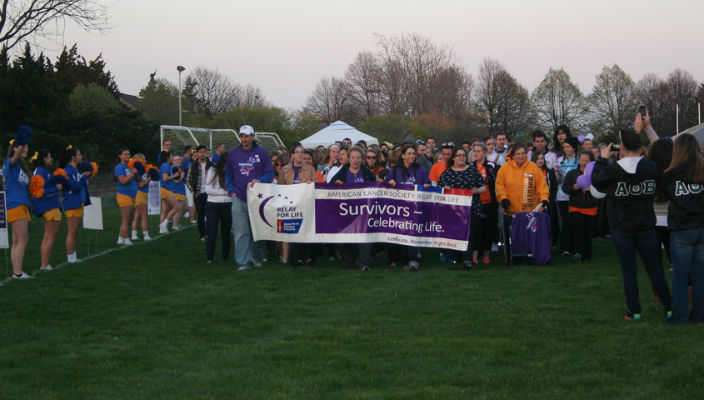 Hofstra students, faculty, and staff will gather at the campus intramural fields Saturday, April 25 at 5 PM to participate in the American Cancer Society’s annual Relay For Life, which raises funds for cancer research.

Last year, the Hofstra community raised more than $84,000, the most among all Long Island colleges and universities.  Hofstra’s event raised the third highest total in Nassau County and was among the top five in metro New York. This year’s goal is $100,000. Event and donation information can be found at the Hofstra Relay for Life page.

Sophomore Ian Strong, a cancer survivor, will speak at this year’s event. Ian is a drama major who has recently returned to Hofstra after taking time off to focus on his health.

The Relay for Life event is a 24-hour walk in which individuals and teams camp out in tents on the intramural fields, with at least one team member on the Hofstra track at all times.  Teams raise funds prior to the event, but they also host fundraising activities during the relay.  This year, the activities include a skin cancer awareness booth run by students from the Hofstra North Shore-LIJ School of Medicine, stations selling treats and refreshments, and pie-in-the-face booths.

A key feature of the evening is the Luminaria ceremony, during which participants, cancer survivors, and caregivers place illuminated paper bags along the track to both honor those who have successfully battled the disease as well as remember those who have died.  This ceremony will begin at 9:30 PM.

Relay for Life began in May 1985, when Tacoma, Wash., colorectal surgeon Dr. Gordy Klatt began a 24-hour, 83-mile walk around a track and raised $27,000 in donations for his local American Cancer Society office.