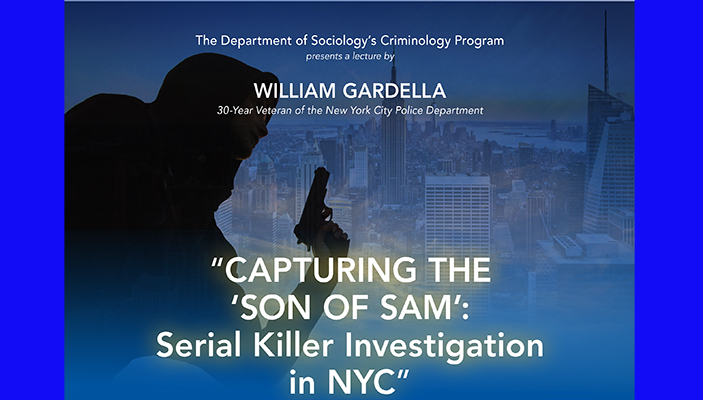 Almost 40 years ago, New York City was terrorized by a serial killer. The shooting of 13 young adults, six of whom died, initiated the largest manhunt in the history of the New York City Police Department. The arresting officer in that case will give a talk about his experience working on the “Son of Sam” case on Wednesday, April 29, at 11:15 a.m., at 103 Breslin Hall, South Campus. This event, which is free and open to the public, is presented by the Sociology Department’s Criminology Program.

The title of William Gardella’s talk is “Capturing the ‘Son of Sam’: Serial Killer Investigation.” Gardella, a 30-year veteran of the New York City Police Department, was one of the two arresting officers of David “Son of Sam” Berkowitz. Gardella’s presentation will provide an overview of the common characteristics of serial killers, followed by a description of the investigation of the “Son of Sam” shootings that occurred in New York City during the late evening hours in 1976-1977. He will focus on the terror generated by the shootings, the extensive news media coverage, and the concomitant effect it had on families and businesses.

After retiring from the NYPD in 1996 at the rank of deputy inspector, Gardella served as an adjunct professor in the Criminal Justice Program at St. John’s University for 14 years.