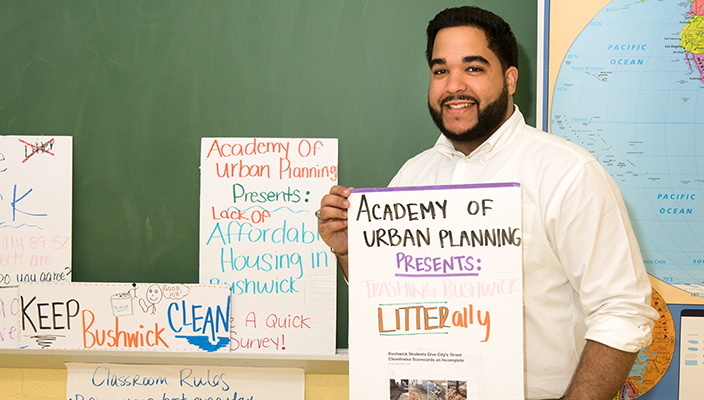 Some folks say ‘you can’t fight City Hall’, but don’t tell that to the 12th graders in Jose Ortiz’s class at the Bushwick Academy of Urban Planning, who are doing just that to better their community.

Ortiz (MS ’13), a social studies and economics teacher, is passionate about empowering his students. He aims to teach them how not only identify problems in their community, but who to contact and how to resolve these issues.

Earlier this school year, he connected the students in his “Participation in Government” class with Generation Citizen, a national civics education program and challenged them to think about neighborhood problems. After much discussion, they zeroed in on the cleanliness of their local streets. The students believed other communities in the city, particularly those in downtown Manhattan, are better kept and get more attention from the Department of Sanitation.  But city records say there is very little difference in the cleanliness of sidewalks in Bushwick and those in Greenwich Village or Soho.

Ortiz and the teens, saying they constantly step over garbage to get around Bushwick) were convinced the city’s information about street sanitation wasn’t accurate.

Encouraged by Ortiz, the students’ class research revealed that street cleanliness is assessed by scorecard system that has not been updated by the Mayor’s Office of Operations since 1974. Black and white photographs are still used for reference.

Forty years ago, neighborhoods in downtown Manhattan that have since been revitalized were in decline. Yet because the city is using outdated images and metrics, the sanitation scorecard judges these now affluent neighborhoods as needing as much, if not more, cleaning than the streets of Bushwick. “The information is antiquated and false,” Ortiz said. “The next step for the students was to figure out an active way to help solve the issue.”

They wrote letters and emailed City Council members to hear their concerns. City Councilman Antonio Reynoso, who chairs the council’s Sanitation Committee, accepted an invitation to meet Ortiz and the class.

“It was important to teach the students that an email or a letter goes a long way if you know the right person to contact,” Ortiz said. Reynoso “welcomed the criticism and assured the class that being able to listen to and act on the students’ work is among the reasons why his job is so important.” The class has been invited to participate in the council’s next Sanitation Committee meeting.

For the rest of the school year, Ortiz says the class will examine the issue from an economic perspective. “How do unclean streets affect home values and business revenue?,” he said. Resources differ depending on where you live. This is especially true in districts where there is a lot more diversity. You would think that because Brooklyn is the city’s most populated borough, it would receive more funding for essentials such as street cleaning, but that isn’t the happening.”

For Ortiz, the project has affirmed his love for teaching. While he is encouraging his students to be active citizens, he is actively involved in their lives, heading the prom committee, yearbook and graduation activities. “There are the students who excel at school and then there are those who struggle,” he said. “It’s especially rewarding to work with the students – the ones who have been in high school for 5 or 6 years, who have been given up on – and see them through to graduation.”

Ortiz recollects his own positive student experience while pursuing his master’s in social studies education at Hofstra. He cites Professors Bruce Torff and Alan Singer as mentors. “Dr. Torff helped me develop professionally and inspired me to teach active and engaging lessons.”

From Dr. Singer’s guidance, Ortiz learned to always seek out new challenges, for him and for his students. “He told me ‘don’t limit yourself.’ I learned from him that as teachers we aren’t in this for the money or the summers off. We become teachers for the children and the betterment of society.”