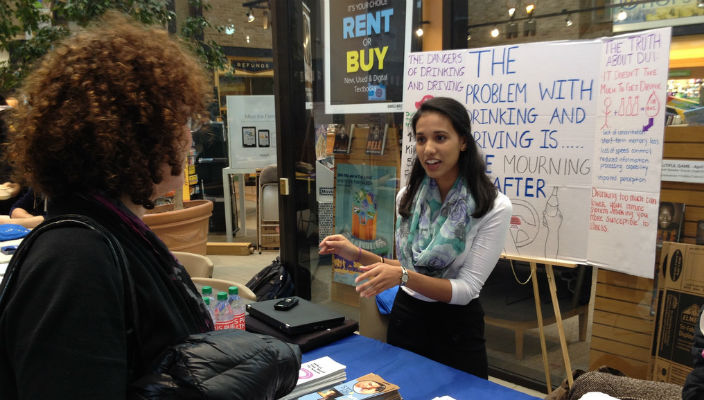 The School of Health Sciences and Human Services, along with the Master of Public Health (MPH) Program and the Society of Public Health Advocates, will observe its third annual National Public Health Week from April 15-17 with a series of free events addressing some of the most pressing challenges facing public health professionals today, including Alzheimer’s Disease awareness and advocacy, the rising challenges of early childhood, HIV prevention, and the mental health impact of Hurricane Sandy.

A key feature this year is the “Raise Your Voice for Care” concert and presentations to call attention to Alzheimer’s disease, a progressive, degenerative disorder that affects an estimated 5.1 Americans by robbing them of memory as well as thinking and language skills.  Sponsored by the Alzheimer’s Foundation of America, the concert features the band Honor By August, whose lead singer Michael Pearsall will share the band’s involvement with the cause and also lead a workshop on songwriting and its therapeutic value.

Again this year, the School of Health Sciences and Human Services and the MPH Program will partner with the Nassau County Department of Health’s Division of Social Health Programs and Minority Health on the second annual Minority Health Conference, which will feature a panel on building health equity in suburban minority communities, as well as an interactive community health fair with free dental, hearing, and HIV screenings.  In addition, interdisciplinary teams of Hofstra students will compete for best video about a Long Island minority health issue during the conference.

Other panels during the three-day series will focus on topics such as international health systems, raising healthy children, the role of dental providers in preventing chronic illness, and public health innovations that are making a difference in communities.

The Hofstra student chapter of the Society of Public Health Advocates will also lead a public-health awareness campaign with exhibits and an information table in the atrium of the Sondra and David S. Mack Student Center, North Campus.

Since 1995, the American Public Health Association has designated one week in April as National Public Health Week, and set a different theme each year. For 2015, the theme is “Healthiest Nation 2030,” which sets a goal of improving America’s health in the span of one generation.

Hofstra launched its School of Health Sciences and Human Services, along with a new Master of Public Health program, in fall 2012. This series of events highlights the emphasis the School places on interdisciplinary problem-solving as well as its emerging role as a leader in educating future health care professionals.

10:30 AM – 3 PM:  Raise Your Voice for Care: Alzheimer’s Foundation Of America College Initiative

2 p.m. – Music and Communication as Therapy

6:30-9 p.m. – Raising of America: Early Childhood and the Future of Our Nation

9-11 a.m. – Re-Envisioning the Role of Dental Health Providers in Prevention And Control of Chronic Illness

Noon-2 p.m. – The Healthiest Nation in One Generation: Promising Innovations