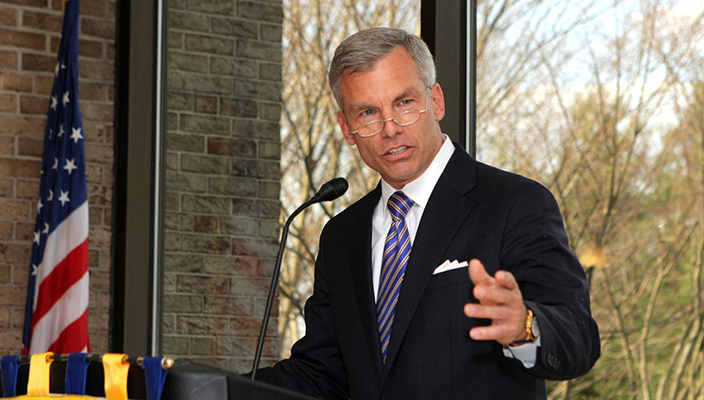 Hofstra University and the Department of Athletics are proud to announce that James C. Metzger Hall at James M. Shuart Stadium will be dedicated on Tuesday, April 7.

The dedication, in honor of Hofstra alumnus James C. Metzger ’83, will occur prior to the Hofstra Men’s Lacrosse game against Marist College. That contest will begin at 7 p.m. Metzger Hall is located on the west side of Shuart Stadium and includes The Fried Center (second floor), suites (third floor) and the press box (fourth floor).

“We are thrilled that the day has come to honor Jim’s many contributions as a student-athlete and benefactor to Hofstra University and the Department of Athletics,” commented Hofstra Vice President and Director of Athletics Jeffrey A. Hathaway. “Jim’s dedication to supporting Pride Athletics is unequaled and we are happy to recognize him and his amazing philanthropy towards Hofstra University with this tremendous honor. We look forward to an incredible day with Jim on April 7.”

Metzger is chairman and CEO of the Whitmore Group Ltd., a leading insurance brokerage and financial services firm on Long Island. Metzger founded the company in 1989. He has become one of the top civic-minded, community-engaged philanthropists in the Metropolitan area.

In 2012 he committed $1.5 million to support Hofstra Athletics, marking the largest gift in the history of Hofstra Athletics. His contribution established a men’s lacrosse program endowment as well as supported the capital improvement fund, which benefits all 17 sports, and was renamed in his honor.

Metzger serves on the Hofstra University Athletics Pride Club Board and is also a member of the Blue and Gold Society. He was the recipient of the 2011 Joseph M. Margiotta Pride Club Distinguished Service Award in recognition of his extraordinary dedication, generosity and service to the Hofstra Athletics Pride Club and Hofstra Athletics. He has also lent his support to the academic side of campus by funding the James C. Metzger-Michael D’Innocenzo Endowed Summer Internship for the Center for Civic Engagement. In 2012 he was the recipient of a Hofstra University Alumni Achievement Award.

In addition to his support of Hofstra, Metzger has been a major supporter of the Big Brothers Big Sisters of Long Island. In 2010 Metzger was the BBBSLI Presidential Honoree as the organization’s Man of the Year. He was recognized for giving much of his time and energy to make a positive impact in the lives of Long Island’s children. In addition, he and Hofstra Athletics Pride Club President E. David Woycik joined together to make the largest single donation in BBBSLI history and create the Metzger-Woycik BBBSLI Endowment Fund. In 2013 he was the recipient of the George Young Award from the National Jewish Sports Hall of Fame. The award is presented to a person who best exemplifies the high ideals of the late New York (Football) Giants General Manager.

An alumnus of Half Hollows Hills East High School, Metzger was an outstanding athlete who earned high school All-America accolades, was the League I and Suffolk County scoring leader and the recipient of the Ray Enners Award as outstanding lacrosse player in Suffolk County in 1977.